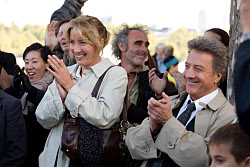 Is it correct Last Chance Harvey writer-director Joel Hopkins wrote the parts of ‘Harvey’ and ‘Kate’ specifically for you and Emma Thompson?

Joel wrote Kate with Emma in mind and me in mind, but he knew Emma. They were and are friends. He didn’t know me. I didn’t quite get the character he wrote for me. He probably wrote more of himself in it, so we spent a couple of months trying to find my character. Because he knew Emma, he wrote Kate fairly close to her. It was pretty spot on. You know, he created a character based on Emma if Emma wasn’t a successful actress.

So you worked hard with Joel to create Harvey?

What is a trait of Harvey’s that is also a trait of Dustin Hoffman’s?

I wanted to be a jazz pianist more than anything. I still want to. Joel had another profession for Harvey. I said, ‘Can we make him a wannabe jazz pianist?’ and then Joel came up with the jingle writer, which is a kind of bastardisation of a jazz pianist. Another thing was I have been married and divorced. I was in fact getting divorced when I made Kramer Vs Kramer (1979). So we drew on that.

Hopefully the heart-breaking scene where Harvey’s daughter tells him she doesn’t want him to walk her down the aisle was not something you experienced first hand.

Thankfully no (laughs). I did walk down the aisle with my daughter and did give her away.

How do you compare Kramer Vs Kramer to Last Chance Harvey? Both deal with families struggling with divorce.

Kramer ends with the divorce being finalised. This movie starts with a reflection of the divorce. Divorce is tough no matter what. I was aware of how painful my divorce personally was for my children. They really suffered the most. They are the ones who get the least credit for the most suffering. There is a lot of stuff in the movie that is coming from our own backgrounds.

As tough as it must be to dig up sad events in your past, it must make it easier to draw on your experience to play Harvey.

Yes. I never like to think of the character being separate to myself. I don’t go toward a so-called character. That character is in you. You just find those parts of you that are and expand them. If I hadn’t become a successful actor or a successful pianist, who I’m sure I wouldn’t have been (laughs), I could have wound up in the state that Harvey finds himself in. It’s not that big of a stretch to have found myself in Harvey’s shoes. What happens if we don’t find the person of our dreams? Or we don’t find work that we love? Or both?

Have you realised your dreams in your personal life and career?

Sure. I’ve been with my wife Lisa the past 35 years so we are either realising a gift or living the biggest lie (laughs). You want to know how you know if you’ve met the woman of your dreams?

When you meet the person of your dreams you realise that however much time you have with them, it is not enough. It is an extraordinary feeling to get into bed every night with that person and sleep next to them and feel safe and known and loved. It doesn’t get better than that.

The world knows Dustin Hoffman as one of the great actors, but have you ever been as low and downtrodden as what Harvey is in the first part of the film?

Well, sure. I’ve been fired before. There is nothing like that because you walk down the street in shock.

When was the last time you were fired?

It was a long time ago, before I was a star, but you never forget. I haven’t been fired from a big film. One of the fun things about acting is you get to act out what you didn’t do in real life. Like, with Harvey. He eventually throws caution to the wind and he begins to live very much in the ‘now’. He just says ‘Fuck it. Let’s just walk around. We don’t have to be anywhere’. It is the freest he has ever felt.

It sounds like you’re a bit jealous of Harvey in that respect? You never throw caution to the wind?

No, not really. I never had the guts to do it. I keep yearning for it. Actually, I say to my wife ‘We always said when the kids were out of the house we would go and do things on a whim. Well, now the kids are out of the house and our youngest is in the last year of college, why don’t we do it’. But, we don’t. Another good friend, Bill Murray, used to do that. He would go to the airport, look up at the board, and the first flight that caught his interest he would get on it. He went to all of these amazing places, although the wife who he was married to at the time he never told what he was doing. He’d call her and say ‘Hi, honey I’m in Dublin’ and she would be expecting him home for dinner. I would love that kind of spontaneity. You know, we have to know what restaurant we’re going to. My wife will say ‘Where are we going?’ and I’ll say ‘I’m not telling you where we are going. I’ll surprise you’ and she’ll say ‘But I need to know how to dress’. I told her ‘One day I’m going to take you to the airport and not tell you, and you’ll think you’re going to a restaurant’.

Last Chance Harvey was shot in London. Is it true you have a house in London?

Yes. We still have the house. I bought it in the 1980s when the US dollar was very, very strong. We still use it. We lived there for a year when I did a play in London and we put our kids in school there. To our dismay they developed English accents within three months and we never thought they would get rid of them.

Maybe that should be your next spontaneous thing. With the kids out of the house in LA, you could move back to London?

Sure. We’ve thought about that. Maybe now we could move back.

Was it nice going back to London to shoot Last Chance Harvey?

Oh yeah. It is terrific. You can walk around the city. Gosh I love to walk around London. Nobody asks you what you do for a living. I like that.

She is. Working with Emma is a rare experience. I know you always hear actors say that about their co-stars. You know ‘Oh, I love working with him or her’, but we just really connect in the most effortless way which is always the object of any art form. You want it to take over. If you play tennis, you want to be in the zone. You are in the zone with her. We never tried to make the scene happen. We just found out what happened. That scared the director, but I think it worked.

After more than 40 films – ranging from The Graduate to Midnight Cowboy to Kramer Vs Kramer, Tootsie and Rain Man – you must know what the secret ingredient is to making a great movie. What’s the secret?

What is weird is that any movie comes out well. I always say to people ‘If you start a movie and you don’t go in scared, then you’re running away from reality because most movies don’t work’. I don’t understand why some movies work and others don’t. No matter what film, everyone tries really hard. Films can be like a plane going down the tarmac, but just doesn’t lift off. You always wonder what that extra ingredient is.