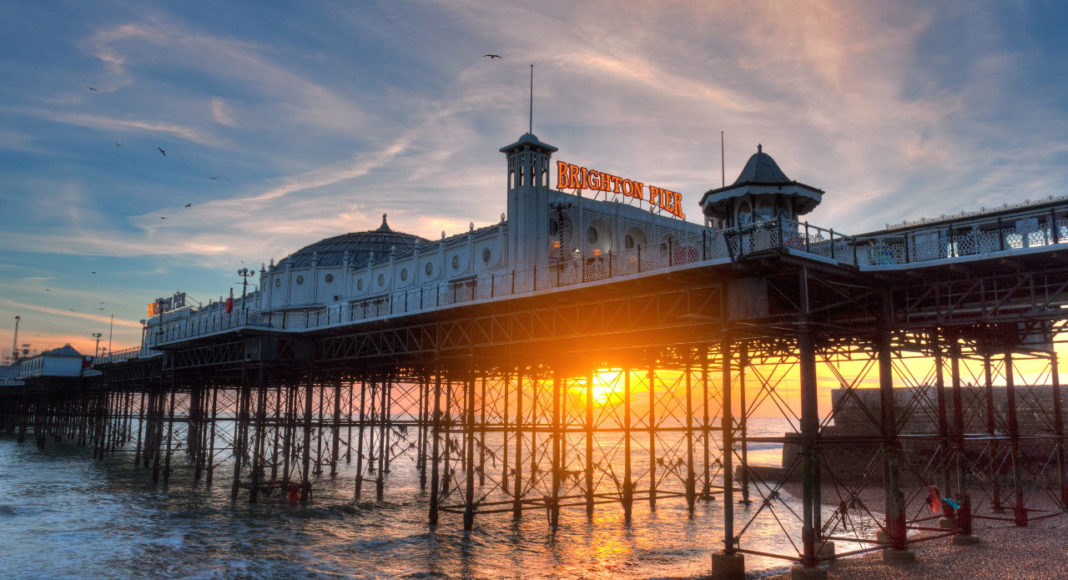 Dodging the seagulls as you eat fish and chips on Brighton Palace Pier. Browsing the antique shops in the cobbled alleys of The Lanes. Taking in the views from the top of the ‘donut’ (aka the British Airways i360 observation pod). Exploring the quirky North Laine with its vegan cafes and independent boutiques. Partying the night away in one of the many bars and clubs. Yep, a weekend in Brighton is a weekend well spent doing all the important things.

Travelling from London to Brighton

Once you exit the M25 onto the M23 it only takes 45 minutes to get from London to Brighton. Just head due south until you reach the sea!

The city of Brighton & Hove has been known as a party destination ever since the Prince Regent visited in the late 18th Century, drawn to its reputation as a decadent playground for London’s rich and famous and its seawater treatments for health, like ‘dipping’ (total immersion under the waves). He loved it so much he had the stunning Royal Pavilion built. Its domes, minarets and pinnacles are still one of the city’s most recognisable attractions.

When to visit Brighton

In May there’s the Brighton Festival, Festival Fringe and Artists’ Open Houses, celebrating the arts, plus The Great Escape music festival. In July there’s Paddle Round the Pier, where crazy homemade rafts take to the sea. In August there’s Pride, celebrating the city’s large LGBTQ+ community. In December there’s Burning the Clocks, a large lantern parade in honour of the winter solstice.

Where to stay in Brighton

There’s a great range of holiday accommodation, hotels and apartments in Brighton for everyone. Stay in a hotel on the seafront with sea views, swimming pools, spas, and on-site bars and restaurants to get your evening started just steps from your comfy room. Or book a whole apartment for the ultimate in self-catering convenience and privacy – there are plenty of bakeries for breakfast goodies.

Things to do in Brighton

As well as a nosy around the Pavilion, there’s plenty for culture vultures to enjoy, including Brighton Museum & Art Gallery plus performances at the Brighton Dome and Brighton Theatre Royal. Take a stroll along the prom to see the beautiful remains of the West Pier, and the stunning Regency architecture plus colourful beach huts in Hove. Go for a ride right by the pebbles on the heritage Volks Electric Railway to Brighton Marina. Explore underwater worlds in the Sea Life Centre.

Award season proves winter is the happiest time of the year