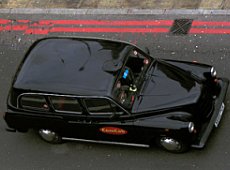 LONDON’S cabbies are the best in the world, beating their driver-rivals from New York into second place, a new survey of international travellers has found.

It is the second year running that London has won the cabbie crown, and what a win it was.

With 33% of the votes in the survey for hotels.com, our women and men in black taxis claimed nearly twice as many votes as runners-up New York (17%) and five times as many as third-placed Berlin (6%).

What sets London taxi drivers apart from those in other cities is the legendary Knowledge – a complex series of routes and streets all across town that new cabbies must learn in order to earn a black cab licence.

“This is what makes London’s taxi service stand out from New York, Paris and every other major city,” said John Thomas, chairman of the Licensed Taxi Drivers Association.

“London’s taxi drivers must dedicate three years to completing the knowledge training to qualify as a London taxi driver and that commitment is vital to offering the very best customer service.”

As well as winning the overall best cabbies award, London’s drivers also cleaned up in the minor categories, clinching most friendly, safest, best driving and cleanliness prizes. On the downside, London’s cabs were rated the most expensive.

Macca out on romantic US road trip

Two New Cycle Superhighways to be Ready for July