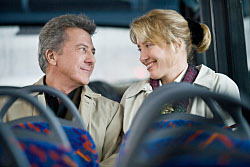 Last Chance Harvey makes you laugh and cry. What was it like for you and Dustin and Hoffman to play ‘Kate’ and ‘Harvey’ at this stage of your careers and lives?

To be honest, it was like a coming of age movie for both of us. I don’t think we could have done it earlier in our careers. I love that about the movie.

Can you talk about that a little more?

Sure. Last Chance Harvey is a profoundly intimate film. We could not have appeared so naked in it earlier in our careers without the plot needing to have wild, out there characters.

Kate is a beautiful, smart woman, but she is lonely and is living a mundane, perhaps, miserable life. Do you know anyone like Kate?

So you used that experience to play Kate?

Well, yes. As an actor, you are always plugging in to bits of information you might have about other people to create the internal word. In the end you have go with what you have inside.

Is it true you were one of the main driving forces behind this film being made? Without you there would be no Last Chance Harvey?

Yes, that is true (laughs). Well, kind of. Without my connection with Dustin the film wouldn’t have been made. It was serendipity because I had just worked with Dustin on Stranger Than Fiction and he wanted to do it. That connection I had made with Dustin was what made the movie happen.

And I understand you had a connection with the director, Joel Hopkins. You met with him early on and that sparked the development of the Last Chance Harvey script. Is that right?

I saw Joel’s film, Jump Tomorrow, which was fantastic. He actually contacted me a while ago about the script to Last Chance Harvey. It was when I came back from Stranger Than Fiction he came back to me with Last Chance Harvey. I told him, ‘You know what? I think I’ve found the answer – Dustin Hoffman’. That’s what happened.

So Joel wrote it specifically for you to play Kate and Dustin to play Harvey?

Does that happen often?

No, and if it does you never want to do it because it is terrible (laughs). It was one of those unusual and happy events.

It must have all come together quickly because Stranger Than Fiction was filmed just a couple of years ago.

Exactly. It happened very quickly. We finished that in 2006. The following year, 2007, 18 months later we were shooting Last Chance Harvey.

You have worked with a lot of great directors and not so good directors. What was it about Joel, who is just 38-years-old and does not have a long list of films on his resume that allowed you to take a risk with him.

True, he is young, but he is a bona fide film director. A lot of people say they are, but they aren’t. Joel is. I knew Joel had good material with Last Chance Harvey, but he still had to put the thing together, write it and direct it, and he did it extremely well. While we were shooting you think ‘Well, this is all good material, but the real trick is creating a film out of it’. I knew he could do it because I loved Jump Tomorrow. I thought he was the very person I could have faith in.

Was Joel intimidated by directing yourself and Dustin?

No. He was great. He and Dustin used to argue sometimes – you know, really, really argue. He also argued with the director of photography. I thought ‘This guy is really stubborn and has the balls and the smarts’.

There are moments in the film that make you feel sad. Harvey and Kate seem like lost, defeated souls going about their lives without expectations or ambition.

Sure. I don’t think that is at all rare for many people. I think you get stuck in your ways. I think as young people, particularly, you develop coping mechanisms that we hold on to way too long and they really get in the way.

Oh yes. Absolutely. Not exactly the same as Kate. My coping mechanisms are different, but I have definitely held on to things from when my father died and other things going on earlier. It has stayed with me for whatever reason. You suddenly think ‘Oh, I’m still doing that? What am I still doing that for? I’m OK now’.

What is Dustin Hoffman like? Does he have as much energy as what it appears?

He’s completely unique (laughs). He’s a man made of energy. He could run me ragged and I have a lot of energy. He’s very exacting on himself. Not on me. I just adored every single second working with him on both movies. I just thought I was so lucky to have found him. Once or twice in your life it happens.

His film resume is beyond comparison. What’s your favourite Dustin Hoffman film?

Midnight Cowboy. I love All The President’s Men as well. He has been in classic, after classic after classic.

You have had your own share of classics with Howard’s End, The Remains of the Day, In The Name of the Father, Sense and Sensibility and the list goes on … At this point in your life looking back, are you happy with what you have achieved?

God yeah! I sort of think ‘Wow, how did all this happen?’ I’m looking forward to building on it too. You know, using what I’ve learned on other things and moving sideways.

Like screenwriting? What’s it like to be known not just as one of Hollywood’s best actors, but also top of the pile as a screenwriter with an Oscar already in your trophy cabinet?

It is great. I recently made a rather interesting discovery. It was most unexpected. I always thought writing was the antidote to acting and the other way around. It didn’t satiate the same creative urge. I now find I am quite wrong about that and writing does serve the same purpose and I can use it as therapeutically as I use acting. Sitting down and writing for two hours, I prescribe that for myself some days. I think ‘OK, you’re feeling this way. You should write’.

Being an Oscar winning actress, Oscar-winning screenwriter, a mother and wife, is it tough for you to make the time to write?

My daughter is eight now and when she goes off to school, between 9am and 3pm, I have the time. That’s plenty. I never write for more than four hours. Then I go and pick her up from school.

When your daughter, Gaia, was born, you took a break from acting.

Yes, I just stopped. I didn’t act for four years, except for one thing, WIT, but that was six or seven weeks in a local studio.

She is actually in Last Chance Harvey. Gaia is on the kids’ table at the wedding and her line is: ‘You do know this is the children’s table?’

So Gaia wants to be an actor?

No (laughs). I asked her after the scene ‘So did you enjoy that?’ and she said ‘I love the room service’ and I said ‘But, as a career, would you like to be an actor?’ and she said ‘No, no, no I don’t really fancy that’. She actually has twin career goals. She wants to be an artist and a cocktail waitress (laughs)

A cocktail waitress? So are you hoping she eventually goes the artist route?

Well, I don’t know. Her father did build his own pub. When they brought in the smoking ban for pubs in Great Britain, he decided he would build the pub.

So cocktail waitress could be in her blood?

You have a big birthday coming up – 50. How do you feel about that?

I think, but who knows, I feel fine about it (laughs). I’m quite looking forward to it in a sense because it is a big milestone. It is one of the biggest because when you reach it you can turn around and say ‘I’m going to be naturalist now’. You could say whatever you want. Funnily enough, my very great friend, the actor Derek Jacobi, recently turned 70 and I said ‘What was that like compared to 50 or 60?’ and he said ‘It’s very different. At 50 you can do whatever you want. Sixty you kind of have to do what you’re doing. Seventy, you have no choices left’. So with a view to making the right choices, I’m taking a year off. That’s my birthday present to myself.

Really? A year off from acting?

When I finish shooting the next Nanny McPhee, I’m not going to act, write or anything like that. I’ll be a Mum, teach drama at my daughter’s school, I’ll cook meals and have fun, go out with my friends, I’ll go to movies and not think about working. I’ll see what bubbles up after that. As an actor and writer, sometimes I think you have to stop creating and let your brain relax. I think it hones the appetite. I think that’s important.

So when is the next Nanny McPhee coming out? You are writing the script again?

Yes. I just have to do the last revisions. We have been green lit for May, 2009. We have to wait for May because we’ve planted a barley field and it won’t be ready until then. There’s also a crow. We have to train the crow. It is set 100 years after the last film. It has nothing to do with the last film. The only thing the same is Nanny McPhee. I’ve been writing it for three years and I’m really excited about it.

I’ve Loved You So Long