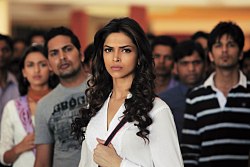 Can you tell us about the film and the character you play?

The film is based on one if the most controversial policies of casteism and reservation system in government and the education system in India. Amitabh Bachchan plays the legendary and idealistic college principal and he has single handedly turned his college into the state’s best. I play the role of Amitabh Bachchan’s daughter, Poorbie Anand, who is also Saif Ali Khan’s love interest in the film. Poorbi’s personality and persona is shaped by the relationships in her life – her daughter, a girlfriend, a friend and a student. In essence, the film is about the impact that the issue of reservation has on a multitude of relationships and how this tests each of them.

What was it like working with Mr Bachchan for the first time?

I have always been in absolute awe of him so to work with him first hand is a memory I will cherish for my entire life. It was incredibly nerve racking at first, but he is a very humble and kind human being and I got to learn so much from him. He is a true legend for me.

And what about working with Saif Ali Khan for the second time?

It is always a pleasure working with Saif. We have a great familiarity and a great comfort level when we are working which always help when you are starting new projects and especially on something as intesnse as this.

What attracted you to the film?

Everything really, from the subject matter of the film, my role and of course the opportunity to work with such a formidable cast and crew. When choosing a film, I always have to feel a connection with it, something I would like to be part of and Aarakshan had all of this for me and more.

Who will the film appeal to?

The film is in a essence a drama which will appeal to the masses – you have the romance, youthfulness, intense (family) drama, entertainment and so forth. From an India perspective, every student and family member would be able to empathise with the characters and connect to the film either they or someone they know have experienced discrimination. Having said that, I think there is a huge global appeal, especially in the Western part of the world, whether UK/USA as the common man wherever they may be has been exposed to the issue of reservation and discrimination.