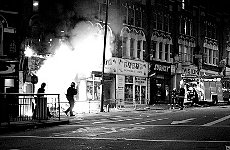 SCOTLAND YARD has confirmed that a man shot in Croydon last night has died in hospital.

The circumstances behind the 26 year old’s death are as yet unclear and subject to investigation. It is the first fatality, since Saturday night’s troubles in Tottenham.

What had started as a peaceful protest for information on the police shooting of Mark Duggan in a mini-cab in Tottenham last week has since escalated night by night into city-wide civic disorder resulting in over 500 arrests. Yesterday afternoon’s (Monday 8 August 2011) troubles are said to have started when a young man refused to be subject to a stop and search in Hackney, leading to a break down in law and order, with violence, looting and vandalism beginning first in the east of London and then spreading to the south, north and west of the city. Riots and looting have been reported further afield in Birmingham and Liverpool too.

Today (Tuesday 9 August 2011) Prime Minster David Cameron, who returned late last night from a family holiday in Italy, announced that Parliament would be recalled on Thursday to discuss the disorder.

Speaking outside No.10 Downing Street this morning he said: “These are sickening scenes – scenes of people looting, vandalising, thieving, robbing, scenes of people attacking police officers and even attacking fire crews as they are trying to put out fires,” he said.

“This is criminality, pure and simple, and it has to be confronted and defeated.”

While there are long-running issues of community cohesion, social equality and aspiration, particularly in the poorer areas of London, what has struck many is the lack of explicit political motive behind the disorder. Much of the activity appears to be a very consumerist form of rioting, something difficult for those on both the right and left to grapple with.

Liberal veteran Simon Hughes, MP for Bermondsey, said “There is no excuse for adults piling in to loot a Foot Locker store on the Walworth Road, some with their kids in hand”.

So when Diane Abbott, Labour MP for Hackney North and Stoke Newington – where much of yesterday’s troubles took place, says that the time has come to consider a curfew in the city, it is clear that the old political truths are being shaken to their core.

Instead of a curfew, the Met Police have announced that an unprecedented 16,000 officers will be on duty on the streets of the capital tonight (Tuesday 9 August 2011), with plastic bullets to be used if deemed necessary.

As for London’s Mayor, Boris Johnson, he finally arrives back today from his Canadian holiday to face up to the calamities that can accumulate when a captain leaves the bridge.

And for football lovers there’s more dismay as it’s confirmed that as well as the cancellation of a series of Premier and Championship games, England’s friendly against Holland at Wembley is off too, due to the need to concentrate police numbers in the battle to regain public order.