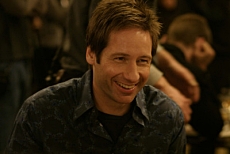 David Duchovny grew up in New York City and while he is inextricably linked with Agent Mulder, his character from cultural phenomenon The X-Files, he has enjoyed a varied career, encompassing a number of strong independent movies, like The Rapture, Kalifornia and Julia Has Two Lovers. He is married to actress Tea Leoni. In Trust The Man he plays Tom, opposite Julianne Moore, a married father of two who’s tempted into infidelity and must strive to save his relationship…

How was making a movie with your best buddies?

It sounds like fun, but actually it’s more nerve-wracking making a movie with a friend because you don’t want to disappoint them. Disappoint a stranger, and you know, maybe you’ll fun into them (laughs), and it’ll be awkward. ‘Hey, sorry I fucked up your movie.’ But with a friend it’s serious. We had fun and we could talk, because we were friends, but I always was aware of doing a great job. And obviously it seems Bart has an ability to make friends outside of New York. (laughs) I, on the other hand, have lots of friends…

What was it like with Bart as your director?

I found Bart to be very comfortable as a director. He was comfortable on set and really relaxed, and to me the quintessential Bart story is that we were shooting part of the last sequence, when we were all in the theatre, and I steal the flowers. Bart came up to me and looked really intense. He called me aside, and I thought he really wanted something important, and he goes, ‘Can I ask you something? Do I have bad breath?‘ (laughs) And he was serious. So I remember how eager I was going into this conversation, thinking how were going to work on something, or change something…

You are in a successful relationship, so how easy was it for you to do this role?

It was fun. What I loved about this character is that he’s rally earnest. He really doesn’t want to have this affair. He has it, and as soon as he does he thinks he’s a sex addict. I just loved that extreme reaction to what he’s done. There’s a scene that’s been cut out of the movie where not only do I think I am a sex addict, I also think I have a venereal disease and every time my phone rings my balls tingle. And it doesn’t matter whether the phone’s in my pants or not. The scene will be on the DVD. Anyway, I go in and I tell the doctor that my testicles seem to tingle. I’m dressed in this robe and he asks the nurse to call my number while he’s holding my balls. It was always one of my favourite scenes when reading the script and I was disappointed when he cut it out. Bart said that at the test screening the audience was so unhappy that I’d had this affair that they didn’t want to see more repercussions, me thinking that I had venereal disease.

You and Julie worked together on Evolution. How was working with her different in this situation, with her husband as director etc?

Well went she went home to sleep with the director I wasn’t shocked. (laughs) I think in a way it was kind of tense that you didn’t want to disappoint your friend, there’s a little extra with me and Julie, we’re pretending to be in this relationship, we’re lying, but always you wonder, ‘I wonder if she thinks I’m full of shit right now. Or does she think I’m a bad actor right now’. So there’s a little more of that, but maybe there’s a little more trust, too.

Bart wants to work on something with Tea. How do you feel about that?

Honestly, I’ll sit her and tell anyone, if you want to make a comedy, you can’t get much better than Tea; she’s the best. I also feel that as Bart knows Tea he can write to her in a way that no one has done since Flirting With Disaster. I was excited. But also a little pissed off because it would mean that we wouldn’t be making another film together right away. I guess he was just using me to get to my wife. (laughs)

So Bart wrote this with you in mind…

So he says. But why did it he offer it to five other actors before me? (laughs) That’s what I find confusing. But I like Tom, I like the fact that he’s so earnest. He’s had this affair, and that’s not likeable, but immediately he thinks he’s a sex addict, and in the original script he thinks he has a venereal disease in which his balls are tingling. People make mistakes and people do things that they’re not supposed to do, but this guy he really loves his wife and he’s trying to make it work. When he screws up he’s devastated and wants to know why and what’s wrong with him. I find that likeable – he always thinks that he’s the problem. Whereas Billy’s character always thinks that the other guy is the problem. And that’s not so likeable – that’s because Billy’s not very likeable. (laughs)

Do you think fidelity in marriage could be harder for men, because monogamy is less ingrained in the male genetic make-up?

Sure, but it goes beyond sex. They’re discovering that the levels of seratonin are much lower in men, and that chemical makes you happy, and it also makes you want to bond. So men not only want to have sex with lots of different women to propagate, or whatever that old argument is, they also have less of the feeling of being part of something. So it’s harder for a man to bond and to feel connected.

Did you feel it was a very male-orientated movie?

You kind of a have an everyman quality, a bit like Jack Lemmon. Is that something you’re aware of, or can’t you really judge that about yourself?

Yeah, I’m just fantastic. (laughs) Well I do, and I despair that they’re not making movies like that with a comedic quality. I can’t do what this guy does and what that guy does, which is a more popular style of comedy right now, so it’s up to me to try and find things, and if can’t find them, then to try and get them made. Mulder is not an everyman – he’s more of an action hero, so I’d rather be considered an normal bloke.

Looking at your TV and film career where do you think you are going? Do you see high points and things you maybe shouldn’t have done?

I gave up a long time ago trying to control my career, so I just do the things that interest me now. I make choices but I don’t have a programme by which I make them. I don’t do things because, say, they’ll make me a more popular film actor. Careers are long, if you’re lucky, and they’re weird. They go up and down, they level off. Sometimes I just stand back and think that this is a very interesting kind of life.

Did you make it a point to say no to more TV work?

Oh yeah. That’s an easy choice to make, because now I don’t have to. If it’s going to be worthwhile, you want it to go long. And I’m not sure I want to go long right now, so maybe if it was more in European or British mould, where it’s really successful and you just did two or three seasons. I’d think of that, but that’s not the way things are being produced.

You’re so known from the X-Files, does that ever get frustrating?

At first it was frustrating, but then I realised that there is very little chance, I would say no chance, that will do anything as big again. There’s no one who will do anything as big because you can’t get bigger, culturally, than the X-Files. I couldn’t do a movie… What was the biggest movie last year? Star Wars? That’s the only other example I could use. If I’d done Star Wars, or done a James Bond, then maybe. But if I’m the 40-year Old Version, then no, or if I make a great big movie that makes tones of money, I’m still going to be seen as Mulder. There’s nothing more culturally pervasive than that show since, say, Star Trek.

So would you do anything more as Mulder?

We talk about doing another movie, a sequel to the first. But with the TV show, Fox could definitely do another X-Files, but I wouldn’t. I left slightly before it was over, and for me I think it’s just gone. It’d be going backwards. The movie is still up in the air. We’re all agreeable to it in theory; we all want to do it, it’d be fun. But as long as it is not another nine years! If it’s just three months, yeah, I love the character and I love the show.

But Gillian is living in London…

Yeah, but that’s only a plane ride away. It’s not like she’s had a sex change or anything. (laughs) I think she’s pregnant.

Are you working on anything else?

I’m about to do a movie called Things We Lost In The Fire, with Halle Berry and Benicio Del Toro. That won’t be too much fun, it’s a heavy kind of movie. I play Halle Berry’s husband, but in this one I die.