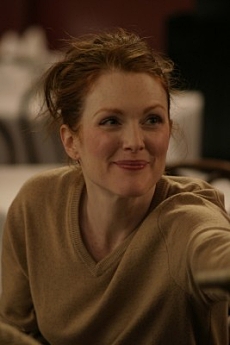 Four-time Oscar nominee Julianne Moore has one of the richest and most varied resumes in Hollywood. She has starred in two previous movies directed by Bart Freundlich, to whom she is now married and with whom she has two young children. Her third outing with Freundlich, Trust The Man, sees her mining her comedic talent, playing opposite David Duchovny as Rebecca, a working mother of two who is striving to balance her work commitments with the needs of her family and her fraying relationship…

What is it like working with your husband, while trying to manage a household?

That’s the hardest part. He is great to work with, and he’s a great director. It’s an enormous cast, everyone’s very experienced, and yet he knew how to speak to everyone in a way that they like to be spoken to. Every actor likes to work in a different way and he instinctively figured it out, which is a gift. So because of that we’ve always had an easy time working together. The hardest part was him working as the director, me as an actor. We have two kids to have to be at school every day, get picked up, get taken to basketball, we have a house, from which we were moving when making the movie, and it was Christmas, so by the time everything was over we were fried. He got mad at me because I said, ‘I don’t think we can do this again.’ Not that I didn’t love working with him, but I was feeling the stress of getting everyone where they needed to be, moving home…

Neither of you is known primarily for your comedy work, so was this a lot of fun to make together?

It was loads of fun for me. Bart is very funny and his friends have been encouraging him for a long time to write a comedy. Was he funny in here? (laughs) Everybody always says, after they say how handsome he is, how funny he is… (laughs) it’s true, and I feel like, ‘You be the movie star, man, I’m tired!’

Do you make excuses, like you have a headache?

It’s fiction, come on! (laughs) But I do love bits in the movie, like the scene where Rebecca says to Elaine that the more Tom asks for sex the less she wants to do it, when he’s desperate, she really doesn’t want to. I like the idea the you can be in a relationship, really love somebody and want everything to work, but still say to your girlfriend, ‘ I’m not sleeping with him right now, because I don’t feel like it. Because that happens to everybody, to every relationship. The retainer is mine [her character wears one in bed during the movie]. I have one and when I wear it Bart is like, ‘Urgh! The retainer, take it out!’ And I have a girlfriend who asked me if I pit it in bed. I was like, ‘Yeah, sure I do. Why, what do you do?‘ And she said, ‘Oh I wait until the lights are out, then I put mine in.’ I said, ‘Oh, you’re much nicer than me…’ (laughs) Everybody has that stuff.

Did it feel uncomfortable letting all that out?

We’ve been together for ten years and any relationship that’s going to be authentic, there’s a degree of intimacy that happens. You are each other’s family, and everything that that entails. But the movie is also very romantic – it’s about how men can become heroes in their own lives. It’s about how valuable their relationship is to them, and the movie presents both sides of it. And we all know that – how romantic a relationship is and also how mundane.

How do you keep the love alive in your own relationship?

I don’t know. I guess we’re lucky. The thing with relationships is that you do always worry that it’s going to go bad. You do worry, and then when it doesn’t, you’re happy about it. I don’t think either of us takes the relationship for granted, and we certainly don’t take our children for granted. I think that’s something, the miracle of happy, healthy children, and we’re all in that together. But also, the same as all the silly magazines say – take time for yourself, go away. It’s hard, but it’s valuable. You ask anyone about their life and usually the first thing they talk about is how their wife or husband or children are doing. They don’t talk about their job, it’s always the family.

Did you ever feel that the script was too close to reality?

No, I liked it. I liked the fact that Rebecca is an actress but she’s also someone who has a job. It’s not like she’s walking around all ‘I’m an actress, I’m an actress’. She has to go to work, and she needs to do all these normal things, and that’s the reality of my life. I love my job, but it is a job, it’s not like this calling I have, where I go into a trance or whatever… so I love the way that was presented. And I think also it does deal with Bart’s real life in the reality of living with an actress is different from the fantasy. The fantasy is that you’ve got this very glamorous woman at your beck and call, not someone with a retainer in your bed! (laughs)

Was it weird playing David Duchovny’s wife? Because he’s your husband’s best friend and your husband was directing…

No, I love David, and I think we had this nice energy together and we feel like we’re a realistic couple. He’s very funny and very smart, and we’re really friends. We have been for a long time, so there’s a degree of comfort that you have. That was one of the nice things about this movie, that there wasn’t a getting to know you period with everybody. Maggie was the only one. At the first reading she was feeling a bit nervous because we all knew each other. But I just said to her, ‘Don’t worry. Everyone’s an asshole.’ (laughs)

How much of you is in the movie, which wasn’t in the script?

I don’t know. They kind of come together at the same time. The script is there but the script goes through you, so it’s always your interpretation. But everything was there and it was scripted. I’ll come back to the retainer – that was my idea, because Bart had her with face cream, and I said, ‘No one really goes to be wearing face cream. Think about the one thing that truly disgusts you and it’s that – the retainer!’ There are lots of things in there from our lives and from the lives of people that we know. One thing from my life is when Billy is one the phone saying ‘Calm down, calm down! Which remote controller do you have…’ That’s something, I tell you, we have so many remotes and I can’t operate anything, and I get furious all the time. If you’re at home with a three-year-old who wants to watch something and you’re by yourself and can’t get the TV to work… I have had to make that phone call.

Do you feel that most of Bart’s movies come from the male perspective?

I do think this movie comes from a man’s point of view, with all these men sitting around saying ‘How did this happen?‘ as their relationships get into trouble. And that’s the funny thing about Bart, he’s very male orientated. Having had a boy and a girl, their different orientation is something I’ve become aware of. I watch my daughter and I see her complications and her volatility, but that’s the way men and women are… And Bart’s very male.

Is it easy to discount scripts sometimes because you know you’ve played a similar character before?

Yes, it is. My friend wrote a novel and said she’d written the part for me. I read it and called her, and I said, “I love you very much but I’ve kind of played this part before… in The Hours. But I saw another part in the script that I thought I could and would like to play.

How do you and Bart not tread on each other’s toes when talking about your work, you being an actor and him being a director?

We’re both very bossy! (laughs) And Bart especially, he’s so bossy. Oh my gosh, and always with directions. I’ll say something like: ‘I’m leaving the city at about 3 o’clock.’ And he’ll say, ‘Well don’t take the mid-town tunnel…’ you know? But like with any relationship you have two personalities together, and one person will want to do one thing, the other another thing, so that stuff does happen. Less about what we do… for example, we always go to the beach. I love the mountains, but Bart loves the beach.

You and Bart working together, does that make it hard for the other actors?

I hope not, I think we make it a point not to be that way, especially not on the set. You don’t want to go on the set and have people in a little huddle that you can’t get into, so we try and be more expansive and more out there, but like I said he has very strong relationships. Billy and David are such good friends of his, so they had their own little guy thing going on.

I don’t like talking about my acting or the scene or any of that stuff. I need the space to do it then; I don’t need a whole load of other words in my head. But every actor’s different. Bart understands my need very well. He came up with this metaphor for what I’m like on set. He said, ‘If I could tell someone I’d tell them that ball is prickly, and do not pick up the ball. Even if the ball rolls right up to you and asks to be picked up, don’t pick up the ball.’ And it’s right, because I’m there doing my thing and it’ll look like, to someone who doesn’t know me, that they can to talk to me about it, but I’ll be, ‘Don’t talk to me!’

Have you had situations like that with other directors?

Well Bart gave me a great bit of advice. I was worrying about something, about someone talking to me. But Bart said, ‘Honey, just tell him.’ So at a good time, sitting in the trailer I told him, and he was like, ‘Okay, fine’. He was very receptive.