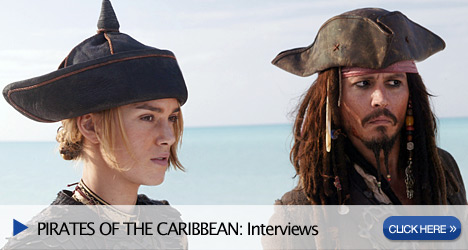 Thanks to an almost unprecedented string of hit films and television shows, Jerry Bruckheimer is the one producer in present day Hollywood who’s as famous as the directors and stars he works with. Bruckheimer’s seemingly uncanny sense of the public’s taste led to him being dubbed the “man with the golden gut” by The Washington Post and his hits include such movies as Top Gun, The Rock, Armageddon, Pearl Harbor and National Treasure, and television shows CSI: Crime Scene Investigation, Without a Trace and The Amazing Race. Even by Bruckheimer’s blockbusting standards however, the Pirates of the Caribbean films are in a class of their own. The first film in the series, Pirates of the Caribbean: The Curse of the Black Pearl, was generally regarded as a no-hoper before its release in the summer of 2003. Yet it went on to be a huge, worldwide hit as well as a career-defining moment for star Johnny Depp who, in Captain Jack Sparrow, created the first cinematic icon of the new century. Last year’s Pirates of the Caribbean: Dead Man’s Chest, with its giant squid and dreaded Davy Jones, went one better, and, with box-office takings in excess of USD1 billion, became the third most successful film of all time. The third film in the series, At World’s End, takes Jack, Elizabeth and Will — aka Johnny Depp, Keira Knightley and Orlando Bloom – into uncharted territories way beyond the Caribbean and reunites them with Captain Barbossa (Geoffrey Rush) and Commodore Norrington (Jack Davenport) among others. The films also introduces new characters played by Chow Yun-Fat and Keith Richards. A good time will undoubtedly be had by all. In the meantime, Jerry Bruckheimer gives us a few more clues about what the new movie has in store and reflects on his remarkable winning streak.

The Curse of the Black Pearl was a big success, but Dead Man’s Chest broke records. Does that raise the bar for the third film?

It’s scary when you make a picture that’s such a huge success. You never quite know. It was against conventional wisdom that a pirate movie based on a theme park ride could be such a hit. Then we came back with the second film, and it’s common knowledge in our business that a sequel will make 20 to 30 percent less than the first one. And yet Dead Man’s Chest made almost double the final figure for The Curse of the Black Pearl. Does that raise expectations even more for the third film? I don’t know, but I certainly wouldn’t like to predict what it’s going to do.

Dead Man’s Chest ended with a cliffhanger when Captain Barbossa made an unexpected reappearance. Does At World’s End pick up where the last film left off and tie up some of the loose ends?

It has a sense of completion because this is the end of this particular story and that’s how it was designed. As far as the actual plot goes, Lord Beckett had gotten Davy Jones’s heart as he planned in the second film and so now he controls Davy Jones. His thing is to try to rid the seas of piracy so the East India Trading Company can have a free run and so he’s decided to do away with pirates once and for all: so there’s no more trials, no more right to lawyers, and he’s hanging all the pirates he can find. I think the other thing that’s really fun about this movie is that there’s never really been a trust between any of the characters because each of them has a devious plan to benefit their own ends. In At World’s End there’s just constant one-upmanship and it’s all about who’s going to end up where, when and how.

You have a Chinese pirate in this film named Sao Feng. Was that just an excuse to hire Chow Yun-Fat?

There are a group of pirate lords from all over the world in this film, so the character wasn’t invented for the sake of hiring a particular actor, no. But any time you make a film you want to hire enormously talented actors who are at the top of their game, and that’s the definition of Chow Yun-Fat. He’s a masterful actor, an international star, and a perfect addition to the trilogy.

You also have Keith Richards playing Jack Sparrow’s father. Was it hard to persuade him to do the role?

The hardest part was trying to fit our film schedule into his touring schedule, so we had to find about three or four days when the Rolling Stones weren’t touring. But I think he was happy to be part of the film. It’s just a small role, but important to the story, and I think he had a ball. He was there with his wife and kids and he clearly didn’t want to leave.

The role of producer is a little hazy to most people. How do you define what you do?

A big part of what I do is look out for the talented people we hire, like Gore Verbinski, the director of Pirates, and make sure they get everything they need to make a terrific movie. On the Pirates films I’m also involved in developing the screenplay and the rewrites along the way. Ted Elliott and Terry Rossio, who write the films, are brilliant guys and they’re right there throughout the production, on the set, even in the editing room. Part of being a producer is just making sure that sort of thing can happen because in the end the story is always king.

If there was any criticism of the second Pirates film it was that people found it a bit complicated and hard to follow. What do you say to that?

What’s interesting about that is that the critics saw it once, but that’s not the way people see films any more. The kids went to see it again and again at the cinema and then saw it on DVD. And you see the film a second time and a lot of stuff comes to light that you didn’t see the first time and everything falls into place. And the same thing with this one, it’s just so rich. If you go back to the first movie, one of the first scenes in the movie is Will making a sword. That sword is given to the governor, the governor gives it to Norrington, and so on, and that’s the same sword that Davy Jones picks up on the deck of the Flying Dutchman, so the sword goes from the first film all the way to the last one. There are things like that that carry over one film to the next throughout.

You made Dead Man’s Chest and At World’s End back to back and over a period of almost two years. Isn’t making one movie at a time bad enough?

It certainly wasn’t easy [laughs]. All the exteriors, anything you saw outside, especially on the islands, were done on location and mainly in the Caribbean. We had a lot of weather problems, we had hurricanes, we had storms, we were on very remote islands, but there’s no way round that when you make a movie on this scale. And from the producer’s point of view it was the only way to make the second and third films. You have Gore Verbinski, who is a directing star based on the first movie and his other work. You have Johnny Depp, who has been a star for years, but who broke out into a huge, mainstream audience on The Curse of the Black Pearl. You have Orlando Bloom, who blossomed even before the first Pirates, and became a superstar after it was released. And then you have Keira Knightley, who’s really come into her own as a phenomenal young actress. To get all of them together for two movies, if you did it separately there would be three or four years in between before you could figure out their schedules and make all of their deals. Blocking out their time based on two back-to-back movies, as well as keeping the rest of the crew together, meant that this was the only way to go.

Looking back, why do you think Pirates of the Caribbean has been so successful when so many pirate films have failed?

I think that to begin with it’s that the writers and Gore Verbinski totally reinvented the pirate genre. We made it different. Look at the first film where instead of pirates wanting to steal treasure, they have to give it back. That fantasy element kind of twisted everything around and made the whole pirates genre seem fresh again.

The first film was an unexpected pleasure. Are people going to have as much fun with the third film as they did with the first?

Our biggest challenge with At World’s End is just to entertain the audience and make sure that they have a great time. And I’m happy with what we’ve done. This film is even more intricate than The Curse of the Black Pearl and Dead Man’s Chest: it has enormous battles, character turns, romance and humor. It’s got all of the elements of why people have gone to the movies for the past hundred years or so: to be pulled into a magical world, taken to places they’ve never been before with characters they fall in love with, and in the end feel a little better than when they walked into the theatre. If we manage that then we’ve done our job.

Diary of the Dead