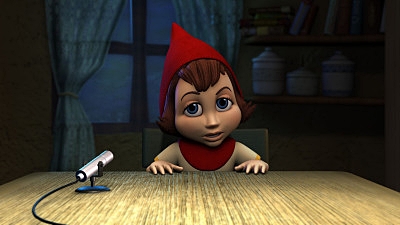 So what got you interested in acting in the first place?

My mom (Kate McCauley) is an actress, so I guess she’s the one that taught me it was a possibility. For as long as I can remember, I’ve always played make-believe … It’s something that I’ve always done, that I’ve always been comfortable doing.

You’ve transitioned from family-friendly movies to more mature roles. What do you want to happen with your career?

I’d like to be a working actor. I know it sounds very simple, but the importance of that cannot be overstated. It sounds really trite, but there really are no small parts, only small actors. And so as long as I’m a working actor, I can improve. I want to work with people that frighten me and excite me, and characters that I don’t believe I’m the best person for the part but I’m still gonna try anyway. Those are my favorite roles.

Do you want to be a movie star?

I don’t feel comfortable doing movies. It’s not what I trained to do. I trained to be a theater actress. You put me on a stage in front of 2,000 people, I know what to do. You put me in front of a camera, I’m like, “Duh” (makes a face). Although I’m still terrified of it — and I freely admit that I am — I’ve kind of grown to love it, and it is it’s own art form. It’s a lot harder I think than people realize.

(I am) just getting to understand it better. I was thrust into a really lofty, enviable, but isolated position with “Princess Diaries” in that I could carry a film before I really knew if I could act.

What do you do when you’re not acting?

I’m a pretty boring person. I have a dog that I love, and a boyfriend (real-estate developer Raffaello Follieri) that I love, and friends that I love, and a family that I love. I’m just trying to spend as much time with them as I can. I love reading — this is just really gonna send you screaming for the hills: my passion is interior decorating. I’m usually at antique fairs and walking around furniture stores in Manhattan or kind of refashioning furniture. My goal for the next 10 years is to get into carpentry, because I really want to learn how to make my own furniture.

You seem to avoid the hard-partying young-star lifestyle. How do you stay out of trouble and the tabloids?

I really don’t drink, I don’t do drugs. I feel like right now I’ve been given so many opportunities I don’t want to mess it up with those things… I think I was raised in a solidly upper-middle class family who had really strong values and excess was not one of the things that my family put up with. And there’s something wildly decadent about the young-star lifestyle, and I just don’t really see the point. I got my partying out of my system in college.

Hoodwinked is based on the Little Red Riding Hood fairy tale – did you like fairy tales when you were a little girl?

I loved all fairy tales as a little girl. There is something so wonderful about hearing stories and then using your own imagination. I did not have one favourite, but do remember looking forward to my parents reading stories at bedtime.

This film takes the classic fairy tale and gives it a modern, funky twist – what attracted you to the role?

I loved the script and agreed pretty well right away.

What was it like playing the voice of such a big, much-loved fairytale character like Little Red Riding Hood?

There was pressure, curiously enough. I thought about all the children who had heard and read the story – including myself – and felt I must not disappoint them.

In Hoodwinked, Little Red Riding Hood is a sassy girl-power character. What was it like playing her?

I like to think that I also have power. As I’ve got older, I feel more like a person than just a girl. Personalities get formed more clearly. If I was told now:’You can not do this or that because you are a girl,’ I would let them have it with both barrels.

Is it difficult acting, when you just providing the voice of an animated character?

It is much more relaxing. You just have to make sure that you are more expressive with your voice. Sometimes, during a movie, some of the best moments can be when you are saying nothing and just being expressive. The camera can catch that silent look and use it. But, with this, you just have to lose yourself in the character.

Do you prefer acting in an animated feature?

It is something I would do again. But I have equally enjoyed the recent experiences of playing Jane Austen in the film, Becoming Jane, (note: released early 2007) and a girl working in a high pressured job on a fashion magazine in The Devil Wears Prada. (note: released October 27th, 2006).

Is it less pressure to be in an animated film, as you do not have got to look ultra-glamourous all the time?

It was much less pressure. I could show up in sweat pants and eat chocolate all day. There is no hair and make-up. You just sit in front of a microphone and go for it. Sometimes, with animation, the voices are done first – and the animation is matched. With this one, the film had been completed and I was matching the voice to the look of it and Red’s movements. So it was complicated, but there was no glamour involved at all.

Do you feel pressure to always look good – both on and off screen?

I would not say it was a pressure. I am not a naturally slobby person, so honestly find it no real effort to look together and look clean. I also do not feel pressure to follow trends or wear the latest designer stuff.

What was it like seeing your voice come out of an animated character?

I always hate it. My reaction is always:’Oh, my God – do I sound like that?’ So it was very much like this during watching the entire film.

I am a lot like her in that I never like being told what to do. I think I am pretty independent, just like her I like taking the initiative and getting my own way, too. But I particularly hate liars. There are quite a few in Hollywood, as you can imagine.

If you could make another fairytale cool, what would it be and would you do it?

I think you could have some great fun with Snow White – and, yes, I would definitely do it under the same circumstances.

What are your ultimate top three friendship tips for our readers?

Always be honest, I would say. And accept their honesty, in return. Be grateful to them. Be ready to take their advice, but be your own person as well.

Do you have a best friend?

Yes – Teresa Miller. She was raised in Britain and is a year older than me. She is always giving me tips on what to wear, because she has this fantastic way of incorporating classic vintage pieces and updating them. She always looks so beautiful and I’ve picked up so many tips from knowing her. She’s also a great person to telephone for general advice.

What was the funniest or best moment for you from making Hoodwinked?

I loved little bird that Red talks to at the start of the film. It made me laugh so much, I had difficulty getting the words out and had a laughing fit. All very embarrassing. I also love it when the stork says:’Awkward.’ There was another pause, as I gathered my thoughts and became serious again.

Night At The Museum