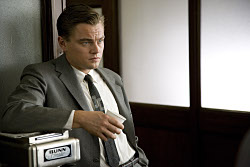 In the new film Revolutionary Road, Leonardo DiCaprio, one of the world’s best-known movie stars, reunites with lead actress Kate Winslet for the first time since they appeared together in Titanic twelve years ago.

He plays Frank Wheeler, who with his wife April (Winslet) sets up home in a picture-perfect 1950s New York suburb. The life of this attractive young couple seems idyllic, but they quickly become disenchanted with suburbia and start making plans to leave America and move to Paris. Yet their dreams are dashed, a fact that has disturbing consequences for their marriage.

Revolutionary Road, directed by Sam Mendes (American Beauty, The Road to Perdition, Jarhead), is adapted from the 1961 landmark novel of the same name by Richard Yates.

There’s obviously a chemistry between you and Kate from your time on Titanic, so it must have felt comfortable being cast opposite her?

It was invaluable to have a dear friend who you have known for over a decade, be a partner in a film like this. To have somebody that talented to work against, who’s also your friend and who you know you have the best intentions for and vice versa, and who you intrinsically trust to give you their forthright honest opinion about what we’re both doing – all that’s something you can’t really buy.

I know a lot of the intense moments in this movie were made that much easier and were pushed to even further limits because of that relationship.

Sam said he took advantage of the fact that Kate and I were so close for many years. He knew it was something he could harness in our performances, and we knew that too. Some of the sequences in which Frank and April are fighting wouldn’t have been the same if Kate and I didn’t know each other this well.

It certainly gets intense. Sometimes it feels like theatre. Some scenes have the intimacy and immediacy that you get on stage, which is rare in film.

It was almost like an actors’ studio piece in the sense that this story was tailor-made for drama.

Of course, in Britain, Sam is known as a stage director as well as a film director.

Sam, to his credit, very much set this up like a theatre production. We did most of the movie in sequence. We shot the beginning of the story at the beginning and the end at the end. By the time we got to the dramatic end sequences, it was second nature in a way.

Playing Frank must have felt like a departure for you.

Yes, in almost every instance I’ve played a character who’s heroic and who defies adversity and the odds in order to fulfil some promise to himself or some other character and is gallant in that regard.

Frank’s not at all like that. He’s charming and dashing, but flawed too. And there’s a dark side to him.

I very much loved his unheroic qualities. I felt the sympathy shifts in this movie from character to character. You have compassion for a character one moment and what’s disconcerting is the next moment they do something intrinsically human and detestable! So you never know where to solidify your feelings – and that to me makes for interesting art.

Frank doesn’t have the capacity or the courage or the heroism to take a chance in life. He’s a product of his own environment and at the end of the movie he realises he is what he is. He’s not April, he’s not willing to risk everything to lead the life he always dreamed of. That was something fascinating. As an actor you don’t find it very often. You don’t usually find material where the lead male character is portrayed like that.

So that’s definitely new for you. Also, Frank has kids and you haven’t played a parent before.

And Frank is someone who feels life is getting away from him.

Yes, all these things are very much a departure. And that’s what I relished in the role. It really is rare in this day and age where you get a character that’s like this and an ensemble cast around you playing roles that are just as interesting too. That’s why at the end of the day it was fantastic to do it.

I’ve never known a situation in my career where a terrible script turned into a movie that was out of this world or was a success. It always starts with the material; it always starts with the truth and honesty of the characters that you read in the screenplay and that’s rarely something that can be remedied if it’s simply not there by the time you shoot the film. Thank God we had that.

Had you read the book before you started shooting?

No, I read the book many times but I received the script first then got hold of the novel afterwards. What it did was answer a lot of questions for me; Justin Haythe’s adaptation was fantastic but there’s only so much a screenplay can tell you.

To be able to read the book and lay in all that subtext, for an actor to go in and say: ‘oh, I get it,’ when Frank is portraying this outward image of sheer bliss in his home or the fact that he’s satisfied with his life – well, the book tells you what he’s REALLY thinking. I read it, and I got to hear that unconscious voice of doubt.

All of us in the cast got that. We all got a little piece from how Yates would describe these characters. It wasn’t something you had to make up yourself. It was straight from a masterpiece of literature, by someone who was very penetrating in their description of the essence of these people.

Those people who know the book love it, but it’s still not widely known.

That’s why it took so long for the film to get made. The book wasn’t a bestseller. Even towards the end of his life, Yates didn’t get the proper credit that he deserved, I don’t think, for creating such a masterpiece. It would have been a shame if this movie had not been reflective of the things that The novel had to offer.

Everyone was very conscious of trying their best within the medium of a two-hour movie to capture the essence of the book.

It’s a very interior story. People express their thoughts, but they don’t always correspond to their actions.

Very much so. At first glance, if you read the outline of this story, it’s two people in the 1950s, people dissatisfied with life in the suburbs and the loss of their own individualism. They make a valiant attempt to change their lives and become happy by moving to Paris, but ultimately they fall short of that. So you say, ‘well, OK, where’s the conflict? I don’t get it.’ It’s so non-traditional in that regard. But then you get the nuances and you think, ‘oh I get it, it’s all within.’ And that’s why the 1950s and that whole time period all dissolved away while we were making the movie. It became about two people all alone in the world, trying to figure out their problems the best way they could. So this is not a nostalgic look at the 1950s, it’s not kitschy, and it’s not about people who were a product of that specific period. It’s simply about two people who weren’t destined to be together, in my opinion.