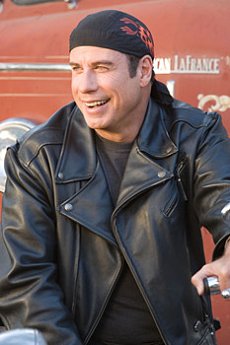 Four suburban friends embark on a life changing road trip in Wild Hogs, keen to recapture the freedom of their youth. Unfortunately they manage to antagonise a lawless biker gang who don’t take kindly to these interlopers on their highway.

Directed by Walt Becker the film stars John Travolta, Tim Allen, Martin Lawrence and William H. Macy, with Ray Liotta weighing in as the angry leader of a pack determined to bring them down a peg or two. Already a huge hit in the United States, Wild Hogs opens on UK screens on Friday April 13.

How do you account for the incredible success of the movie in America – and the fact that it has appealed to so many women?

Allen :I think because America is tired of Spartans. Seeing our poster, you want to see these four guys on a trip, no matter what we did they cast us beautifully. You want to see this group of people doing what they’re doing. It’s a real simple movie, like some of the best comedies are. We don’t overthink it.

Is it true Ray that you weren’t a motorcyclist before this? And was there much trepidation on your part doing it in the film?

Liotta :The best way to learn anything is through a movie, because you have so much time to do it and you have great people teaching you. They had tons of bikes, we started out on the dirt on little bikes and gradually worked our way up.

How about you John, you were familiar with bikes. Was that enough to persuade you to sign on?

Travolta :I think if you’re familiar with something that you have a lot of fun doing you don’t have a lot of attention on it, so I anticipated the fun of it more than I did the challenge.

Do you feel the need to do anything similarly adventurous as your characters when you reach middle age – whenever that may be?

Travolta :I’ve felt that my whole life. From the time I was a kid, I had a wanderlust. I always wanted to travel, in any form – by plane, train, boat, car or motorcycle. Now I think that if I ever do have a mid life crisis I have all the toys to turn to quickly.

Allen :The only time it occurred to me was when I turned 50. My brother sent me AARP, which is a retirement magazine. It didn’t occur to me until I saw that, I got really depressed for about a day. I think Bob Hope once said ‘if you didn’t know how old you are how old would you be?’. I’ve stayed about 11 years old, really.

Travolta :But you’re still having sex at 52!

Allen :That’s what the cover of the magazine said, ‘still having sex at 52!’, that’s when I started sobbing.

Is it true, Tim, that you used to ride sports bikes?

Allen :I have a Ducati 990 and also a Norton, both set up for road racing. And because of this movie I’m going to go to superbike school, because I want to learn. It’s actually more interesting to me, the Harleys are wonderful for long distance cruising but to me they’re a little dangerous when it comes to manoeuvring them.

Whose idea was it to offer Peter Fonda a cameo in the film, adding a frisson given his own motorbike history?

Travolta :It was mine. I was 14 years old when he arrived on the screen in Easy Rider. It would be like me turning up showing up in a white suit and a black shirt in some dance movie 20 years from now, it has significance. And I knew it would, even though it addresses a certain generation. It worked like a charm.

There’s a scene in the film, Tim, where you smack a bull on his behind. How was that to do?

Allen :They used several bulls, they had to get them real tired or they wouldn’t have sent us in there because it would have killed us. My daughter was on set with us one day, and a bull went by us at speed with cowboys chasing it. It had gored one of the horses and just took off down this road. I thought it was a good thing that wasn’t the one we were slapping on the ass, because that would have made it a whole different movie.

Was there a spirit of camaraderie on set, or was there a degree of one upmanship?

Allen :We all have a lot of mutual respect for each other. Everybody had something they do really well, and it was nice to watch everybody work. John is pretty aggressive on a bike, let me tell you. Ramming me, he thought that was real fun, he’d chase me around.

Travolta :Tim is an antagoniser, you have to drop the gauntlet at some time after all those jokes at our expense. He would rev the bike until it was deafening. I couldn’t get off my bike to handle him so I had to bump into him – lots.

You’re mostly known for comedies Tim, do you hanker after more drama?

Allen :I did one a while back with Christian Slater called Cletis Tout, and I guess it was a little terrifying for families to see me shoot three people in the head in the opening scene. It didn’t go well. You want to laugh, there’s something funny about it, it was a great part and I loved the movie. Martin Short said that with funny guys, you sign a contract with people so that’s what you’re going to do. I’m comfortable with that, I do it well. One of my favourite actors is Russell Crowe, comedy doesn’t come easy to the guy where it does for me. But he can do Master & Commander and it’d be very hard for me to act in one of those hats. As much as I’d like to do it, I get caught in the groove I’m in, and though no-one likes to be typecast sometimes that’s what it is.

You’ve tackled many genres, John, and never been stuck too long in one. Why do you think you’ve been so lucky in that regard?

Travolta :I don’t know, but I think I was brave and experimented a lot, and in doing so, the audience had belief in me and the studios backed it up. I think what you have to do is have a box office success in every genre, and then you’re set for life. Fortunately I happened to do that so I get a myriad of offers.

You’ve danced with many people in your career, and here get to teach William H. Macy a few moves. Where does he fit in your list of iconic dance partners?

Travolta :He wasn’t bad. As far as men are concerned Sean Connery was my favourite dance partner. It was at a big party for Frank Sinatra, there was every old fashioned Hollywood name there. My wife and I were about to leave and Sean said, ‘John, where are you going?’. I said, ‘I’ve got to go, I’m working tomorrow morning,’ and he said, ‘not before you dance with me, you’re not!’. And there I was, dancing with James Bond with everybody watching. Since dancing with Princess Diana I’m a hot ticket as a dance partner, male or female.

Travolta :Being that he is my senior and he is Bond, I let him lead. I’m no fool.

The film has proved to be a huge hit, will the Hogs ride again?

Travolta :This is what happened. We all thought the movie was going to do around USD20 million which is a very respectable opening weekend, it’s a big success if you do that. We woke up to USD39.7 million, which broke something like five records in a row, and was really turning people’s heads. Sunday night the movie’s been out two days and I get a call that I’m getting an offer for the sequel on Monday. I said, ‘come on, let us enjoy a week!’. They were already on it on Sunday night. So, what we say to that is, let’s see a script. But I know the boys want to be together again.