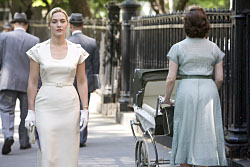 British actress Kate Winslet stars in the new film Revolutionary Road, which has received four Golden Globe nominations, including one for her as Best Actress in a Motion Picture – Drama. The film reunites her with Leonardo DiCaprio for the first time since they co-starred in Titanic twelve years ago.

She plays April Wheeler, an attractive young woman with ambitions to be a stage actress. She sets up home with her husband Frank (DiCaprio) in an idyllic 1950s suburb within commuting distance of New York. They seem a blessed couple. But after they tire of suburbia and start planning to move to Paris, the reality of their lives has a sobering impact on their marriage.

Revolutionary Road is directed by Winslet’s husband Sam Mendes (American Beauty, The Road to Perdition, Jarhead). It is adapted by screenwriter Justin Haythe from the 1961 landmark novel of the same name by Richard Yates. It has been nominated for a Golden Globe as Best Motion Picture – Drama. Mendes and DiCaprio are also nominated, for Best Director – Motion Picture and Best Actor in a Motion Picture – Drama, respectively.

Was this as challenging a role as it looked?

It really was. It was a remarkable opportunity for any actress and it was one of the most challenging experiences of my life. That’s what you hope for. You go home with something new to think about and new skills to use in other roles.

What did you learn from playing April?

Not to over-plan. You can think as much as you like, but on set you really need to be willing to let everything change. That’s what I took home from Sam as a director: the feeling that it’s OK to be scared, and not to feel you have to come to work and know all the answers. And that it’s OK to admit that – that it’s also OK to say, I’m flailing, I’m out to sea, I’m drowning. Save me.

Judging by the book, April must have been a difficult character to play.

In the novel, she’s very highly strung, bordering on hysterical sometimes. That’s OK, but I knew I could only use fragments of that. I knew I had to find a way of internalising her very big, overpowering emotions and make them come from some internal place, as opposed to peppering her with tics and little moves. That could have been repetitive for audiences to watch.

So with April, I had to stop myself from being too faithful to the book. Yet with this film, the story’s faithful, the script is faithful, and the atmosphere’s faithful.

Do you think April and Frank seem almost an idealised couple?

Not exactly. There was a united opinion that when we first meet April and Frank, they’re slightly more glamorous than anyone else, but almost accidentally so. For instance, they could have put red lipstick on me, but they didn’t.

Do you think April is potentially a good actress?

No. I think she’s absolutely terrible! It’s so tragic.

Because she thinks acting could be an escape for her.

It was important to me that in the beginning she fantasised about becoming not even a great actress, but just a good one. It was, ‘oh my God, you got it wrong so long ago.’

That ties in later with her escapist fantasy about moving to Paris.

That’s right. All those little details really help to compound the sense of unrealised disappointment in all the characters, but particularly April.

There’s a lot of excitement about you and Leo, having starred in such an iconic film, being finally back on screen together.

Yes, and because the novel is so spectacular and it’s so important to us to honour that story, it’s good that it’s Leo and me together because we might pull in a different audience. Leo is amazing. I genuinely think he’s the best actor of his generation.

Yet the performances from all the supporting cast are remarkable too.

That was so important for Sam. In being able to cast Leo and me as the leads, he was able to cast complete unknowns in some supporting roles. He was free to go only for the actor who was absolutely the best person to play a specific part. And that was a luxury, because what they brought with them was unbelievable stage experience and gravity. It was amazing to be around that level of focus and commitment. There’s nothing like being in such a special collaborative environment like that. I learned a hell of a lot just by watching them.

It certainly feels almost like theatre. There’s a lot of intimate, raw emotion on screen.

Sam didn’t feel the desire to plan everything, to dot every I and cross every T. He didn’t storyboard. It was the first film of his in which he let that go. He knew we just had to figure things out on each day.

For instance, we rehearsed the dinner party scene in a totally different room. I thought: we should be sitting down, we should be constricted. We’d lit it and we were ready to go, but Sam sensed things weren’t right and asked the cast what they thought. Everyone said we should be seated in the dining room. It takes a hell of a lot for a director to put his hands up and say, I’ve got it wrong, you’re right, thank you very much, let’s try it this way.

You played an important part in getting this film off the ground, didn’t you?

The script was sent to me by my L.A. agent. I read it and loved it. But we said, ‘How long can we hang on to this?’ It’s rare for an actress to hang on to a project without becoming a producer. I thought: let’s find out about the rights, make director and other actor suggestions.

Then this remarkable thing happened. The phone rang at home and it was an old friend of Sam’s, an actress named Cynthia O’Neal. She said: “Is it true you’re interested in playing April Wheeler?” I said, “Yes, Cynthia, but how could you have known that?” She said: “My darling, I own the rights!”

Cynthia is the widow of the actor Patrick O’Neal, who bought the rights to Revolutionary Road in a poker game. He felt so passionately about the story that he wrote a screenplay himself, and bequeathed the rights to Cynthia.

By this point I’d slipped the script to Leo when we had coffee in New York. I said to him: “I love it, you should play Frank”. He read it but nothing came of it. Nothing becomes a reality until there’s a director. So I said to Sam you’ve got to read it. Your first thought will be: ‘It’s suburbia, so it’s similar territory to American Beauty. But I promise you it’s such a wildly different story’.

Then Sam and Leo had a meeting which I organised at the Academy Awards in 2007. Leo and I had arranged to meet for a drink. I called Leo to confirm, but told him, ‘I’m not coming, but Sam is, and he’s on his way. You two need to talk.’ Sam and Leo had this great talk. Two months later, we were on set. All the dreams I didn’t dare to dream, coming together!

Was it hard coming home with Sam after being on set, working together on this intense story about a failing relationship? Did it spill over into your lives as husband and wife, or were you able to separate it?

No, we weren’t able to separate it. Sam really tried to in the beginning because quite rightly, I think he felt we had to protect our sanity. He’s very good at compartmentalising. He can multi-task like a crazy person on set, but when he goes home he switches off.

I’ve always thought I left my work at work, but I don’t at all. I completely bring it home. So I really needed to talk about it. We’d come home and I’d still be full of ideas I wanted to discuss with Sam. And he’d say: ‘We have to have a system. First, let me take my shoes off. Secondly, let me make us both a cup of tea. And then, why don’t you write down what you want to say?’

But I often need to talk about something in the moment I’m thinking about it, even if it’s a terrible idea. So Sam realised it would be unfair to stop me from doing that. In the end it just ended up being a really good thing. It would have been too confusing otherwise. We totally took Revolutionary Road home, and discussed it all the time.