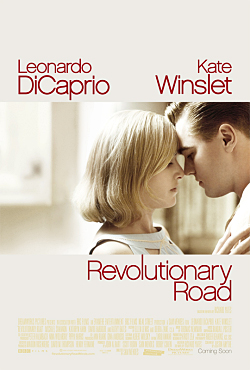 Sam Mendes, best known as a British stage director before he won an Oscar for his film directing debut American Beauty (1999), returns to suburbia in his new film Revolutionary Road. It stars Leonardo DiCaprio and Kate Winslet (who is Mendes’s wife), reuniting on screen for the first time since Titanic.

They play Frank and April Wheeler, an attractive young couple who in the mid-1950s set up home in a picture-perfect New York suburb. Their life seems idyllic, but they harbour a dream of quitting suburbia for Paris – a dream that stalls, with profound consequences for their relationship.

The film is adapted from the landmark 1961 novel of the same name by Richard Yates.

How long have you been familiar with the book? What made you want to adapt it for film?

It was handed to me! I read the screenplay because Kate wanted to play the part. I read it four years ago, and immediately felt I shouldn’t direct it, because like American Beauty it’s set in the suburbs again. But then I read the book, and it absolutely slayed me. Weirdly, it seems to me not to be about suburbia, but about a marriage.

Yes, it’s about this community and yes, it’s about this era, the 1950s, but at the heart of it, it’s about men and women. And I realised I absolutely loved those two characters, even though Frank in some ways is weak and manipulative, while April is sometimes cruel and filled with rage. Despite all that, I thought they were wonderful, deeply sympathetic and endlessly fascinating.

Why did you cast Leonardo DiCaprio?

The idea of Leo came to me when I was reading the book. It was pretty obvious in a way. It was a combination of the two actors and the part. Leo’s is an amazing performance. I thought he’d ask: ‘Do I have to be such a jerk?’ But if anything he pushed Frank further towards harshness, weakness and cruelty, and I think that was exciting for him. He’s played a lot of heroic characters, or troubled people with a gun in his hand, but I don’t think he’s ever played a father, or someone who felt his life has passed him by.

He and Kate have a chemistry that’s so great. They’re like brother and sister.
I didn’t have to create a relationship. There was one already there.

As for Kate, she totally got the book, and she wanted to understand April. She doesn’t play within her comfort zone at all. She needed to get inside the head of a woman who acted as April did –and it was tough. She did it with great aplomb and grace.

Revolutionary Road seems less stylised than American Beauty and your other films, The Road to Perdition and Jarhead.

I felt like it needed a much more honest, direct and simple approach than American Beauty, which was made in a high style, and had fantasy sequences and visual flourishes throughout.

This is a movie that’s about performance. It’s about trying to penetrate below all the layers of skin and get to the essence of somebody.

The bells and whistles of movie-making are fun for a while, but you get easily bored with them. With my first three movies there was this sense of ‘ooh, I can try this now, or that,’ whereas often you come back to things that fascinate you, like human relationships – the things that would fascinate me on stage. The emotional truth of Revolutionary Road reminds me of a play.

In my mind, it’s trying to be a sister film to Who’s Afraid of Virginia Woolf?, Scenes from a Marriage and those sorts of movies, rather than American Beauty and Little Children which are more obviously about suburbia. I felt I was making a movie about a marriage, and that’s still what I feel – it’s a love story and a tragic love story.

I love (the TV series) Mad Men, but that’s much more about the era itself. I met the guy who wrote and created Mad Men, and he told me Revolutionary Road was the great novel of that era, and that it was an inspiration for the series.

It’s so interesting that our culture has chosen to revisit that period now, because it seems both familiar and utterly strange. It’s so great to look at, and it’s hard not to fetishise that period. People dressed so well. How could we have lived like that, and so recently? Now we all wear T-shirts and jeans, and in comparison we look awful.

You make a big point of commuters, men in hats.

I know. I wanted to make them look like salmon swimming upstream.

But although it’s a period piece, the theme of the film feels modern.

April tries to put a word to it. Her longing is represented by Paris. But Paris is a metaphor. We all have our Paris, our escape, our Eden. There’s a point in your life you think everything is available to you. And that’s what she’s trying to get back to. But in any era, it’s difficult to wake up in your 30s and realise you’re not living the life you want. If your life is underpinned by disappointment, how do you rid yourself of it? For me, that’s what makes it a universal story.

I think people now often have discussions about how you balance your life, having kids and a job. If you studied the amount of time you spent talking with your partner about a variety of topics, that would be pretty close to the top of the list. So it’s incredibly current.

Where did you shoot?

In Darien, Connecticut. It was all on location: we wanted to get a sense of reality, and for the pressure cooker of the Wheelers’ house to feel real. It was very hot. It was a small house, with all the crew jammed in there. But I think that reality fed the performances.

Do you regard it as a bleak story?

People who love the book say yes, it’s bleak but it’s wonderful: and that’s what I hope people will say about the movie. It’s weird when people say: don’t you find it depressing? I say no. It’s sad and serious, but these are things we should be able to embrace. The idea that drama can’t be entertaining is crazy.

On the Waterfront is a tragedy. But it’s a great and uplifting movie. So are A Streetcar Named Desire and East of Eden. Because whenever you see anything done well, it’s uplifting.

The idea that tragedy is somehow depressing is wrong. If it works, it makes you feel more alive to have that experience, and that’s what I’m pushing for in Revolutionary Road. Yes, it’s tragic, but it also somehow stimulates you to feel more alive. And that was my goal.