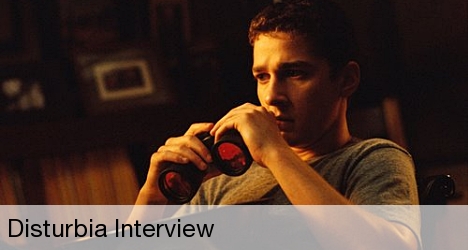 What kind of character do you play?

I play Kale Brecht. Um, there’s two sides to him, and he, and, he uh– Beginning of the movie, he’s really, uh, seems sheltered, happy individual, uh, who has a great relationship with his father. They’re really close. Then he loses his father in an accident. His whole world, uh, changes, as it would for anybody who loses a parent. He’s not individual in that. And after losing his father, you know, it’s tough, you know, with a single parent, especially when the mother’s dealing with the same pain, um, and is not available. So, it’s a guy without direction.

How does your character evolve?

Kale becomes this really dark, uh…uh, closed off human being, who’s just dealing with his pain. You know, it’s a fresh wound. He just becomes this, this out of control kid. Um, and then he gets put on house arrest for some of his behavior.

What happens to Kale after he is put under house arrest?

…I could do whatever I want. I could watch TV. And, those things slowly start getting cut off. Um, ’cause again, his mother’s a single mother, and, financially, it’s a burden. You have to pay to be on house arrest. She’s having to pay for him to be stuck in the house. But, you know, his iTunes start going away, his Xbox 360 Live is going away. Things that he used to enjoy and thought would help him through it are now gone. And he’s having to deal with himself, which is not what he wants to do.

So Kale is pretty into new technologies and gadgets. What do you think about all the “hyper” technology that’s happening right now?

Well, there’s a lot of technology, you know. Uh, kids are on it, you know. YouTube and MySpace have revolutionized communication, really, for kids, you know. And, you know, it’s funny, they always said cell phones would bring people closer together. It really brings you further away…because some people prefer to text message than have a conversation, you know.

How does Kale become involved with Mr. Turner?

His mother, you know, becomes connected with him in some way, and this mysterious guy he knows nothing about other than what he’s been seeing. Meanwhile, there’s, you know, throughout the film, there’s, there’s all this commentary about these murders that are happening in the neighborhood.

Can you describe what makes David Morse’s character so scary?

Beginning of the movie, he’s elusive, he’s just another guy in the neighborhood. Um, and you find out that he is more disturbed than you would imagine, and seems like a really lonely man, played by David Morse, who’s extremely, powerful, in everything he does, you know, even, even things that you would take, you know, that would be light, or they speak, you know. He’s got a huge range, and he doesn’t have to do much. Um, and then it starts closely, you know, it’s closing in on him.

So, is Mr. Turner really what he seems or is this just a product of Kale’s troubled state?

Whether he’s crazy or not, he doesn’t know. He’s just, he’s, because of his boredom now feeding into what his, you know– He’s, he’s screwing himself, you know. Uh, and starts going into these fantasy worlds, and drifting in and out of what might be reality, what might not. He doesn’t know.

Can you describe Kale’s relationship with Sarah?

“When she picks up the binoculars, boom, it’s love at first sight. It’s like, you know, putting a ring on the finger. You’re just, you know. She becomes the stability and the anchor in his life. Um, not just the love interest, but his stability, his comfort, his wake-ups, his sleeps, his everything..”

I met D.J. and he broke it down, what he wanted to do, and, uh– And he works with great actors. He’s great with actors. And I felt safe with D.J. When you have a director like that, you’re able to branch off and go so many different directions, which made the script, you know, come to life.