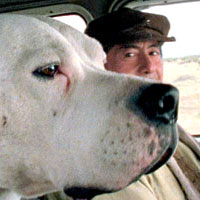 Historias Minimas featured a man’s quest for a long lost dog. Bombon, El Perro (Bombon, The Dog) concerns a man’s re-awakening thanks to his friendship with a dog. Why have you chosen to use dogs in these stories?

Dogs are important in our lives. For people who live in the countryside, they all have dogs, so everybody has a story with a dog. It is not the relationship between the man and the dog that is important, the dog is a kind of fuel in the development of the man’s character. In Historias Minimas it is a sort of guilty conscience of the personality. The dog is his guilt.In Bombon, El Perro, there is someone who is unemployed and in his fifties. In Argentina, with the current economic problems, you don’t normally get a second chance in life. But Bombon becomes his second chance. And therefore, even though it is realistic, it is really a fable. It could never happen. But now I want to start working with cats <laughs>.

It’s actually quite a strange relationship between the animal and its master. It’s not a very emotional relationship…

…Juan (Bombon’s owner, Juan Villegas) is a very reserved fellow. He’s not open and neither is the dog. It’s a sort of mysterious and deep relationship. I like the dog because in fact it doesn’t appear to behave like a dog. He’s not very affectionate, he’s a bit of a mystery himself and you never really know what he is going to do. There is a huge internal conflict within the conscience of the dog <laughs>. Yes, it is somewhat strange the relationship with the dog.

Did you have any difficulties directing Gregorio (the dog playing Bombon)?

No, he was a very obedient dog. From when I first read the script I was looking for a dog that was not particularly effusive and affectionate. That would be reserved. Of course the dog is exactly like us, some moments you actually see that he is thinking. Look, <Carlos passes a photo of the dog>, he’s got his internal conflicts <laughs>.

Historias Minimas and the upcoming Bombon, El Perro are both set in Patagonia and focus on the lives of quite ordinary people struggling in a difficult economy. Why have you chosen to use Patagonia in particular as the backdrop for these stories?

I have a weakness for Patagonia. Ever since I was a child. Maybe for me it is like for many Europeans, Patagonia is a mysterious area in a world where mystery has become rare. In Patagonia you can drive for several hours without even seeing another human being. You really feel that you are at the end of the world. I find that attractive in many ways, especially to place these small, intricate little stories of ordinary people in these epic backgrounds.

And the people who live there. You can still find … you can find anyone and it is a big event. Here in the city you can meet a hundred people in five minutes but in contrast in Patagonia any kind of meeting has a different significance.

Juan is an innocent character and you get the feeling that he is forever about to get tricked by one of his associates. But the trick never comes, is that the twist?

How is it? Evil is in the eye of the beholder <laughs>. Actually, I think they are a bit too good my characters. On the other hand there is this edge to Juan’s dog training partner Walter (Walter Donado) so that you never know quite what he will do.

How do you find and choose your actors?

Well, I don’t work with actors. I work with real people. I make a first draft of the script, then I find the people and when I find them I re-write the script, everything, according to the personalities I have. So the character is in fact built into the script and in a sense it becomes almost like a documentary. They use their own backdrops, actions, etc and that’s the way I like to work.

Is the script somewhat improvised as you go along then, in response to the personalities?

No. When I improvise, the film can go in and out. So I prefer to have a solid construction and stick to it. It is the only way to guarantee that ninety minutes later you will still have someone there watching the film. In fact the more you improvise the more you need a script with a solid structure, so I work on the script for many months.

Does the presence of the Basque community you film in Bahia Blanca explain Bombon, El Perro being shown at the Film Festival in San Sebastian (a city in the Basque region of Spain)?

…No, Historias Minimas was shown there too (winning the Special Jury Prize in 2002) and I get on very well with the people of San Sebastian. I eat brilliantly well there which is really quite important as I eat really quite badly when I am in Patagonia during filming <laughs>.

One last question, I notice that the music for both these films was composed by Nicolas Sorin. Any relation?