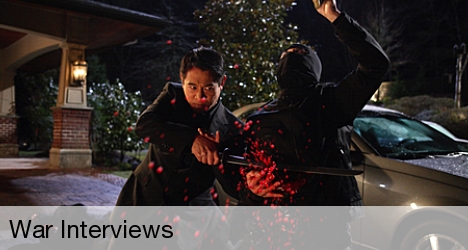 On his Character:
The character I play, you don’t know if he is a bad guy or a good guy. He tries to figure out who are his enemies, who’s fighting his angle, and he’s trying to get revenge and get the real bad guy who caused the loss of his family, the loss of his children. So from that point he will go to the end to find the truth.

On Jason Statham:
Jason is a great actor and also a great action star, it was good.

On Cory Yuen:
He’s done a lot of different kinds of film; modern style, ancient style, martial arts movies. We are very close friends – even in the States we have worked on a bunch of films. He’s a great guy and we’re open to hard work.

On the Fighting Style in the Film:
The director explained that he wanted to see real fighting – we were beating each other up for real. He said try to do it real to help the story, because in reality it wouldn’t be long – normally when humans are fighting each other its really short; you don’t need a lot of time, usually just a few moves and someone’s dead already – particularly the character I play who has had special training to kill people.

On his Character and the plot:
It’s a story of friendship about two guys that have such a close relationship with each other and life is so rosie and so good, an out comes this train wreck, this massive explosion in their friendship, two guys working in the same job they got families that get together at the weekend and all of a sudden this catastrophe happens and it just shows you how one thing can lead to another in like a domino affect, how a guys life can get turned upside down, its about one mans obsession looking through my eyes to try and catch this one guy Rogue who is responsible for the death of his closest friends family, he does whatever it takes to try and catch this guy but its like trying to catch a ghost , as soon as he turns up the guys not there.

On working with Jet Li:
Your only as good as the guy opposite you, I have had fights with different stunt men, you go like this (punches the air) and they react like two seconds later, and to be in an action scene with Jet Li, I mean come on its like the best there is.

On Action in the film:
It’s a good action film because all the action is like parlayed off the drama, every piece of action that comes is a really emotional fight, and most of my battles are really violent because his life has just crumbled and he is in a really terrible place, he’s got nothing left just this obsession so every opportunity that he gets to use physicality he does so in a tough way.

On why he wanted to be part of the film:
First and foremost I am a massive fan of Corey Yuen and given any opportunity to work well with him I certainly would do so and the chances of working with Jet Li and doing something with a much deeper story and a more meaningful character for me to play and to come head to head with Jet and bash it out was something I was deprived of in my previous movie I did with him. I wanted to make good what was never done.

On Phillip G Atwells directing style:
His whole motivation was to keep everything real he was the first person to say we don’t want you doing any Kung Fu. If you hit somebody, we don’t want you to hot someone 1000 times and not have a cut on them. You might hit somebody and knock them out first time, he wanted it to be as real as possible.