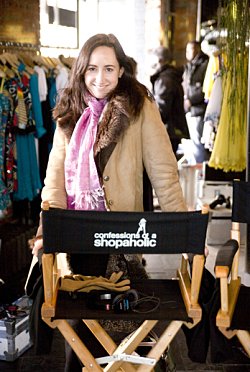 In the new romantic comedy Confessions Of A Shopaholic, Isla Fisher stars as Becky Bloomwood, a beautiful, irrepressible young woman who is a compulsive spender. She dreams of working for a glamorous fashion magazine; instead she gets a job reporting for a financial publication, edited by Luke Brandon (Hugh Dancy). Ostensibly Becky and Luke have little, if anything in common, but inevitably, opposites attract and sparks fly.

The film is based on the wildly popular books by Sophie Kinsella, (who describes herself as a ‘mild shopaholic’). The novelist discusses the joys and perils of spending and splurging – and the sheer fun of the new movie.

The creditors are after her and her finances are a total mess. Yet she still can’t keep herself away from shops. Rebecca Bloomwood (Isla Fisher), the central character in Confessions Of A Shopaholic is a delightfully flawed heroine who loves to spend – and simply can’t stop herself. She always looks stunning, but there is a very high price to pay for her compulsive shopping sprees.

In this upbeat and deliciously funny film, Becky is the kind of heroine that everyone (at least most of us) can identify with. She is fun, friendly and engaging. But shopping, we rapidly discover, is her Achilles heel. There is just no stopping this woman, not even credit card debt that is potentially crippling. Because of her shopping addiction, she’s constantly getting into messes. And the irony of the story is that this profligate young woman is a financial journalist, (having previously worked for a gardening magazine) who ends up dishing out financial advice to readers. Hugh Dancy plays her boss, who takes a shine to her despite her obvious flaws.

Sophie Kinsella, an associate producer on the film, worked briefly as a financial journalist herself, before turning to fiction. She is the author of the Shopaholic series as well as the stand-alone novels Can You Keep A Secret, The Undomestic Goddess and Remember Me. She has also written novels under her real name, Madeleine Wickham.

The novelist and her husband Henry live in London with their three children, 12 year-old Freddy, 11 year-old Hugo and 3 year-old Oscar.

Tall and slim with long dark hair, Kinsella looks glamorous and pretty as she sits down in Beverly Hills for the following interview. The author is dressed in a Paul Smith outfit – cream silk top edged in black lace with black, cropped trousers. Her jewelled platform sling backs are by Beverly Feldman for Russell and Bromley. Appropriately, there is an inscription on the sole of the shoes which reads: ‘too much is not enough’. “I saw them and I instantly knew I had to wear them for this interview,” laughs Kinsella. “They spoke to me.”

What was the inspiration for your stories?

I used to spend money and get amnesia every month when the VISA bill arrived and that’s what inspired me to create this character. I would say ‘what is this? What am I looking at? I don’t remember going to that shop and buying that?’ It is that complete denial we all have. I would say to my husband: ‘I’ve never even been to that shop, what are they talking about?’ and he would be the one to say ‘remember when you bought that?’ And than I would have that sinking feeling. That was the starting point for Becky, this crazy girl who loves to shop. I could see the comedy potential. A lot of the inspiration came from the way I think about shopping, the thrill and the excitement

Is there a little bit of you in your heroine Becky?

We have the same ‘logic’ when we shop and we think in the same way. It’s that idea of a bargain being hard to resist: ‘buy one get one free’, stocking up on moisturisers for example. That is something I do all the time. When Becky says ‘moisturiser is a staple’ that’s me, I need it, it is a basic.

How well do the books translate to the film?

I think the film is great; it captures the shopping and the comedy. It makes it all very visual and I think Isla does an amazing job of capturing Becky’s qualities.

How do you think she does that, bringing your character to life?

What I love is that you can see the thought processes on her face, when she is caught out or when she is lusting after a dress. You can see exactly what is going through her head, you are with her. She is so funny and endearing and sweet. In the books I have never described what Becky looks like, which is a deliberate ploy, partly because I wanted everyone to relate to her. For me, the important thing about Becky is what’s inside. I know her mind so well and it’s almost as though when I am writing, I am not looking at her, I am looking through her eyes at the world. So when it came to the movie, it was like a blank slate and for me it wasn’t about an actress having any particular physical attributes, it was about the girl. We can see her lust for shopping, we can see her being caught up in silly situations and we can understand why she does what she does. The thing about Becky is that she has to be funny and Isla is so funny. When I heard that Isla had been cast, I thought ‘yes, how fantastic’.

Can you talk about the ‘green scarf’ in the film? How significant is it and how is it special?

The green scarf in the film is special because it is so supple. There is a scene in which you actually see Rebecca through the scarf and I love that scene, because it is filtering the light. The scarf they use is stunning, it is an amazing garment with so much motion and it floats behind her. It is a significant item because it is the first thing that links Becky and Luke, so in terms of the romance it is huge. That storyline comes straight out of the book. Becky wants the money to buy the scarf. She disrupts events to try and buy it and Luke ends up giving her the money. She tells a lie about buying it for a sick aunt and then he catches her out. For me that scene is magical because he ‘gets’ her. There is a frisson.

Were there any clothes you fell in love with from the film?

I loved them all, the clothes are unbelievable, and they are all inspiring. I really loved the belts. After being on the movie set, I started wearing a lot more belts with everything.

What did you learn about fashion?

You start to see clothes in a different way when you are on a movie set, around so many amazing outfits. I used every excuse to hang around the wardrobe trailer, as you can imagine. You see how they create an entire look from head to toe. That is very different from me. I just open my wardrobe and start pulling things out in a shambolic manner and put them together to make an outfit.

Which is your favourite outfit from the film?

That is tough because I love them all so much. I love Becky’s short purple outfit that she wears for her interview at Alette magazine. It is amazing. But my real favourite is a lilac Lanvin dress with a huge ruffle, which she cinches in with a belt. She buys it at Barney’s and wears it on television with an amazing necklace.

Did you get to keep anything from the film?

You know, I did get to snaffle a little bag that had been in the sample sale scene in the movie. It is a red clutch bag and it is gorgeous.

How are you preparing for the premiere of the movie?

Oh my God, I am doing emergency Pilates. I thought oh no, I just sit on my bum eating biscuits all day, I better do something about this and take things in hand, so I got a personal trainer to give me a bit of poise. But I am just going to enjoy the evening. I plan to wear a clingy, black and white Alexander McQueen dress; (that is why I need the Pilates) and an amazing Alexander McQueen bag, with a pink union jack. It is very exciting, unlike anything that has ever happened to me before.

Finally what advice do you have for shopaholics?

Buy yourself a little treat if you feel the need to shop. Instead of buying the Chanel bag, buy the Chanel lipstick; you still get the packaging, which we love of course and the experience, which we love too. Go to a lovely store, wander about and enjoy it all; then head for the makeup department and buy eye shadow rather than the head to toe outfit. You can still get a buzz. There’s no point trying to go cold turkey and stop shopping altogether.