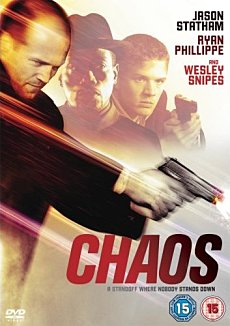 Released: 24 March 2008
Rookie Detective Shane Dekker (Ryan Phillippe) and maverick veteran Detective Quentin Conners (Jason Statham) are partnered up and must uncover how five bank robbers escaped from a bank heist with over one billion dollars. The criminal mastermind of the heist, known only as Lorenz (Wesley Snipes), begins a cat and mouse game with detectives, leading them to discover a far greater conspiracy is at hand.

After a hostage situation goes horrifically wrong Conners finds himself suspended and without a partner. But a high-tech bank heist puts him back in the action with rookie partner Dekker by his side. The team arrive at the crime scene to find a bank robbery that never was – there is no cash missing and it seems that not a penny has been stolen. Confused by this development and trusting his gut instinct that something is seriously amiss, Conners delves deeper and suddenly finds himself in pursuit of an evil criminal mastermind. The detectives discover the thieves have deployed a high-tech computer virus based on the CHAOS theory into the bank’s system and over a billion dollars has been electronically swiped from thousands of bank accounts.

Backing the boys up are two of the hottest and most seductive female detectives in town, Det. Teddy Galloway (Justine Waddell) who remains in unrequited love with Conners and Keegan Connor Tracy (Marnie Rollins) who drools over the prospect of bedding green recruit Dekker. “For a list of things you can put in my mouth,” she tells him after stuffing her business card in his jacket pocket.

But not all is as it seems. Bad guy Lorenz has another more sinister agenda and is working hard to spin a web of deceit guaranteed to draw in his ultimate prey, Detective Quentin Conners. Unwittingly, Conners barrels headlong into the pursuit but his shady past comes back to haunt him with a vengeance and ultimately deadly results. Soon the CHAOS theory is not only the basis for the biggest bank heist in history, but also the entire investigation as it succumbs to its evil clutches.