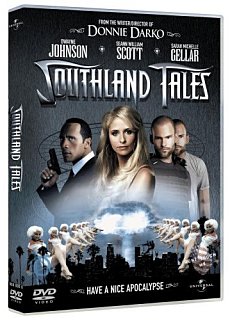 Released: 31 March 2008
Writer and director Richard Kelly’s debut feature film Donnie Darko grew from cult status into a phenomenal smash hit when released on DVD. And DVD is the perfect way to experience his new film, as its multi-layered story demands repeat viewings and the crystal clear picture and awesome sound quality will further heighten the impact of the outstanding special effects and excellent soundtrack that includes music specially composed for the film by Moby. The film will be accompanied by the insightful documentary that runs for over 30 minutes, USIdent TV – Survielling the Southland (The Making of Southland Tales).

Similar to Kelly’s groundbreaking, unconventional debut feature, SOUTHLAND TALES is a multilayered vision which defies categorisation. A visceral experience, with stunning production values, special effects and a heavy nod to pop culture, the film is part dark comedy, part sci-fi, part thriller, part fairy tale, and even part musical and it is the singular vision of one man.

Los Angeles, 2008: The city stands on the brink of social, economic and environmental disaster. Southland Tales is an epic story narrated by Iraq veteran Private Pilot Abilene (Justin Timberlake) and is set over the course of three days centered in Los Angeles that culminate in an apocalyptic 4th July climax. Together with Abilene (Timberlake), the large ensemble cast of characters includes Boxer Santaros (Dwayne Johnson), an action star stricken with amnesia, Krysta Now (Sarah Michelle Gellar), an adult film star developing her own reality television project, and Roland Taverner (Seann William Scott), a Hermosa Beach police officer who holds the key to a vast conspiracy.

Richard Kelly comments, “What is it all about in the end? I think it’s about where our country is going, our current dilemma when you’re talking about alternative fuel, terrorism, our civil liberties being taken away from us, and the potential effects of environmental degradation on human behaviour, neurological responses, global warming. You know, there’s a lot going on here.”

Wereholf: The Beast Among Us Competition