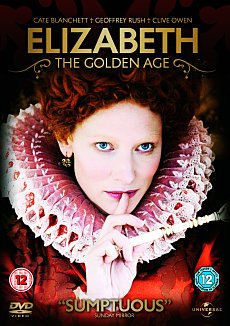 Award winning director, Shekhar Kapur (“Elizabeth”, “Four Feathers”) explores the complexities of his virgin Queen nearly 10 years after the release of the Academy Award® and BAFTA award winning “Elizabeth”. Elizabeth: The Golden Age brings the original cast members together again to tell the story of the virgin Queen as woman and as warrior, chronicling the Golden years of her sovereignty.

Shot at historic locations across the UK, including Winchester Cathedral and Eilean Donan Castle, Elizabeth: The Golden Age accounts the defying years of the monarch’s reign as she fights to preserve England as the protestant heartland. Having already won a BAFTA for her portrayal of the virgin Queen and nominated for a Golden Globe® for this depiction of Elizabeth, Cate Blanchett reveals the woman behind the crown, a monarch in love, struggling to reconcile her heart with her duties. Clive Owen (Academy Award® nominee for “Closer”) is Sir Walter Raleigh, the dashing adventurer who catches her eye and with whom the Queen wants to explore, but knows she cannot. Instead Elizabeth encourages her favourite lady-in waiting Bess played by Abbie Cornish (“Candy”), to befriend Raleigh so that she herself can be near him.

The love triangle that Elizabeth’s curiosity creates is punctuated by Elizabeth’s trusted Advisor, Sir Francis Walsingham played by the Academy Award® winning Geoffrey Rush* (Shine, Pirates Of The Caribbean: The Curse Of The Black Pearl). Walsingham uncovers an assassination plot that could topple the throne. By unmasking traitors that include Elizabeth’s own cousin Mary Stuart played by Samantha Morton (“In America”, “Longford”) and King Philip of Spain played by Jordi Mollà (“Blow”) he unknowingly sets England up for destruction.