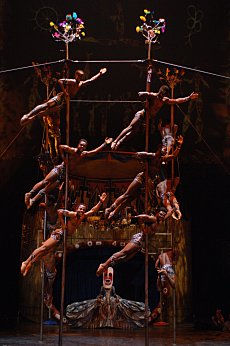 Since the world premiere in Frankfurt, Germany, December 2005, more than 1.5 million visitors have experienced and enjoyed the sensual onslaught that is AFRIKA! AFRIKA! Curator, André Heller’s rousing discovery of Africa fascinates the audience with its radiant colours, enchanting visual beauty, irresistible rhythms and dazzling energy which pulsates from its tented Palaces. Andre Heller and the troupe travelled through Afrika for two years – between Mali and Morocco, Egypt and South Africa – from coast to coast and into the heart of the continent in aid of sourcing their performers and gathering inspiration for this phenomenal show. This magical circus has been touring across Northern Europe and will leave Amsterdam to descend upon The O2 site from 17th January 2008. Delivering a breathtaking extravaganza which will excite hundreds of thousands of visitors in London.

AFRIKA! AFRIKA! celebrates more than 100 artistes, dancers, singers and musicians with unique and special talents. These performers were discovered across 17 different African nations including Cameroon, Senegal, Nigeria, Ghana, Algeria and Benin, speaking 23 different dialects from a multitude of different religious backgrounds. AFRIKA! AFRIKA! is a synthesis of the arts, an African journey and an art exhibit at the circus. Experience the wonderful facets of the continent and be infected by its life-affirming exuberance and vitality.

The show is a unique and extraordinary combination of dance and acrobatics, such as the high wire artists from Tanzania who present themselves with an inexhaustible well of artistic creativity, making the audience hold its breath. There’s a master contortionist, hip-hop break dancers and an exhilarating Gumboot dance. The artists perform their dangerous acts at incredible speeds that demonstrate both artistic and athletic prowess. Mixing contemporary arts with dining and shopping, AFRIKA! AFRIKA! truly is entertainment of the highest calibre, that appeals to both families and adults alike.

André Heller is one of the most influential and successful multimedia artists in the world. His work includes garden shows, processions, as well as new renditions of circus and variety shows. André has worked on films and fireworks spectacles, built labyrinths and produced theatre pieces and shows that have been seen from Broadway to Vienna, from India to China and from South America to Africa.