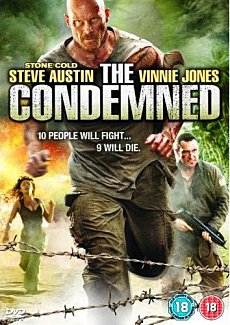 Released: 24 March 2008
On a remote island, the most vicious form of illegal entertainment is about to go… online. Ten ‘contestants’ all inmates already on death-row, are pitted against one another in a sadistic game of life and death. After thirty hours, the last one left alive will go free. All the players are ruthless killers.

The game is to stay alive.

The Comdemned stars World Wrestling Entertainment (WWE) Superstar ‘Stone Cold’ Steve Austin as Jack Conrad, a death row prisoner in a corrupt Central American prison, a hell hole on earth. In a bizarre twist, Conrad is ‘purchased’ by a wealthy television producer to take part in an illegal reality game show. Brought to a remote desolate island, Conrad finds himself trapped in a fight to the death against nine other condemned killers from all corners of the world. With no chance of escape – and millions of viewers watching the uncensored violence online – Conrad must use all his murderous strength and skills to remain the last man standing… his only chance of freedom.

With explosive devices strapped to their ankles, set to detonate in exactly thirty hours, the contestants are on the clock to survive. Killing off the other contestants seems the best option but Jack Conrad wants out and looks to escape this new hell on earth. As the games begin, people are stabbed, necks are broken, profanity abounds as evil TV producer and game mastermind Ian Breckel (Robert Mammone – The Matrix Reloaded, The Matrix Revolutions) watches this mess delightedly, despite his co-workers, distraught reactions as moral and ethical lines are crossed. The FBI are on a mission to track the source and close it down but will they be too late?

Buy The Condemned at Amazon >>