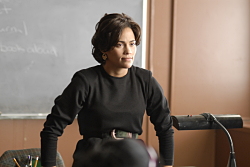 LEE DANIELS began his career in entertainment as a manager representing a talent pool that included several Academy Awards nominees and winners. Monster’s Ball, the first production by Lee Daniels Entertainment, marked Daniels as the first African-American sole producer of an Academy Award winner, earning substantial critical and box office success. The film was nominated for two Academy Awards in 2002 – Best Original Screenplay and Best Actress, for which Halle Berry won an Oscar. Daniels’ next producing project was The Woodsman, starring Kevin Bacon, Kyra Sedgwick and Mos Def, which premiered at the Sundance Film Festival in 2004. Daniels made his directorial debut with 2006’s Shadowboxer, starring Helen Mirren and Cuba Gooding Jr, and he recently produced Tennessee, a road movie starring old friend Mariah Carey. Precious: Based on the Novel Push by Sapphire is his second directorial outing…

Initially, the author, Sapphire, was against a film adaptation. Yet you won her round…

Love her. Love her for that. It took me nine, probably ten, years to stalk her. I have stalked her for ten years. Sapphire is a scholar. She is a genius. She is a poet. She is an intellect beyond belief. She doesn’t give a fuck about Hollywood. She don’t care about it, just doesn’t. It is about literature and I think that Lady Luck must have been on my side because she finally embraced the idea. I think that even if I did a bad movie, it would not affect her brilliant masterpiece and I think that she saw the difference in both. She finally realised it and I was there the right time stalking her.

Do you know why she changed her mind? Did she see one of your other films maybe?

I think it was a combination of things, but I think she saw Shadowboxer and she really thought I could bring something to the world that she created and she is very excited that I am doing it.

Did she come to the film set?

What was the moment?

It was the scene when the mother tells Precious about the HIV. Precious says, ‘Do you have it?’ And the mother says ‘No.’ And Precious says, ‘How do you know?’ And the mother says, ‘Because we didn’t do it up in the ass!’ No one else thought that was funny. I don’t think it was funny but it was this brilliant delivery of it. I think we were laughing at the execution. It was exactly how Sapphire wrote it in the book so there was this triangle of understanding between Mo’Nique, Sapphire and myself.

It is a tough film but also a very tough book. You have had to soften the delivery a little bit, and add a few more rays of light…

A little bit!! A lot of a bit. If I had done the book it would have been X-rated. Not that I have a problem with doing X-rated films. I haven’t yet. But this would have lost an audience. I think that the audience should be entitled to breathe. I think with the book, if it gets too much, emotionally, you can put it down. It affected me so that I had to stop. I had to digest it. I put it down and picked it up again later on and I think that the sequences and the touches of humour that we put in the script really do it justice. Geoffrey Fletcher really did a marvellous job translating this book, this script, and we just took it to another place on the screen. We had to let the audience breathe. If you’ve read that book you will know what I am talking about.

You’ve said that you knew people who were moments away from being characters in this story. From where in your life do you know these people?

I knew these people when I was a kid. I knew these people as an adult. I know these people now. As a 50-year-old man, there are Precious, there are Marys. These are real life people to me. Everybody in that movie is someone that I have known. And I find it surprising that people don’t know them. I know that if you live in New York City there is no way you don’t see Precious. And I often see Mary. I am down in the grocery store and I am watching mothers yank on their kids, and just really fuming at them, with a cigarette dangling from their mouth. It doesn’t matter if they’re black, Puerto Rican, white or Chinese. Each woman exists.

Was the character of Mary the hardest to cast? She needs to be very complex, almost macabre, yet able to show that she did have something good inside her once…

Mary is a very complex person and she was the first person that I did cast. Mo’Nique is my best friend; a very, very good friend and I speak to her every day. I like working with friends. Mariah Carey is another. Gabby has become a good friend. I like working with friends because I know they have my back and we have such a tight budgetary parameter in dealing with the film that you have to count on friendships to take you through those barriers. It is a difficult journey. With regards to Mo’Nique what we did, only friends can do. It went beyond the director-actor friendship; she really understands me. Mo’Nique understands me in my primal place and we just talked about her. And we talked about me. We talked about my insecurities, paranoia, hopes and dreams and sex life, and what I love poetry-wise and what literature I like. And then she sort of broke down and then we transcended all that shit that she knew that I wanted into her interpretation of Mary. It was volatile, explosive, a magical moment, for me. I expected everything that she gave me. I was not surprised by a syllable.

With Oprah Winfrey and Tyler Perry as producers on your movie, did that help get the movie made?

No. They came on after the movie was made.

Executive producers. I make these little movies and I pray that people see them. When I made Shadowboxer, I was sure that we were going to end up straight to DVD. I had no idea that it would be a theatrical release. It is mind-jarring because I am actually a filmmaker who just wants his movie to be seen by people on a screen not on a DVD. So the reward for me is that my writer who wrote this magnificent book embraced me and the film and that we didn’t go to straight to DVD. We took Precious to Cannes and I was in Toronto and I was in Spain and Germany and for a filmmaker, that’s pretty exciting.

You’re friends with Mariah Carey as you say. But was it a tough sell to get her to play the Ms Weiss character, with no make-up and glitz?

She was like, ‘Oh, no, what’s he doing now?’ I said, ‘Mariah, you’ve got to come solo. You can’t come with your posse, you can’t come with a scrubbed face, there’s no make up. We’ve got to make you more ugly!’ And I think that she embraced it with gusto. She was so excited to be on an independent set and, oh, God I love her! I can’t even begin to tell you how much I love her. I am so proud of her, too. I am just so proud of her, man, because you don’t know what it is like to step outside of that bubble that she’s in. Bringing her out of that bubble with all of those people, and that machine she has around her, and getting her into my cocoon, that was a triumph for me. It was like Christmas time for me, and for her, too. It was liberating. I was out of sorts in the beginning and her too. As I put the costume on, her hands were shaking because the fabric was a cheap rayon and she was, ‘What am I doing?’ And she kept looking at the lighting and the overhead lighting was beating down on her. She actually had no control and it just drove her and then she finally succumbed and through that submission came this life and I tell you, man, that was a highlight for me. I knew she could do it, but I didn’t think she would go to where she went. And though I feel validated about Mo’Nique, I feel extra validated about Mariah and Lenny Kravitz, because those characters really are not the people that they are. Nor is Mary for that matter. But I knew Mo’Nique had the chops. And though you don’t see that much of Lenny in the movie, that is a huge departure for the Kravitz I know. So it’s a massive jump for the rock star that I know, and the diva that I know as my friend.

You were born in West Philadelphia but do you have a special connection with Harlem, where Precious is set?

I went back and forth to Harlem my entire teenage life. I remember being 18 or 17 and stealing my mum’s car so I could go and hangout with my cousins in Harlem. We were always trying to get into Studio 54. We didn’t get in, and then I’d be too afraid to come home.

On that point, you’ve been very brave in talking about the abuse you suffered as a child. That’s reflected specifically in the movie, right, with Precious’ dream sequences?

I was never sexually abused, but I was physically abused at home. And when bad things happened to me or I saw bad things happen, I would fantasize. When I was 12, I saw someone killed. I remember very clearly that I went into a bubble and I became a prince in a silver crown, knighting someone with my sceptre. I just dropped into a place right there, so I wouldn’t feel the pain. My imagination was God’s way of protecting me and keeping me sane, and I think we catch that in the movie, yes.

When did you first decide that you wanted to direct films, as well as produce them?

I started directing theatre. That’s how it started. I was in theatre early on and I moved. The camera was an animal to me that scared me but I learned about that while I was managing actors, and while I was producing films. Because of that, actors have always been in my comfort zone. My whole thing to begin with in the entertainment industry was media and managing actors throughout the world and being on sets and studying. I was always studying the process of filmmaking through filmmakers and through cinematographers and through production designers etc etc. So that whole experience was learned not through your conventional way.

Finally, what was the most important thing that you wanted to convey with this film?

That never again should we look at Precious and not look at Precious. When you stumble across this girl you will acknowledge her. Because I have cousins that are her, friends that are her and even having friends and cousins that are her, I still disassociate myself. It is so important for me that I embrace this girl with all my gusto, because she is embracing me. The other important part of this story is about learning to love yourself, and accepting who you are. Those are the two big points I hope people will walk away with from this film. Who knows if they will? But I pray to God that they do.