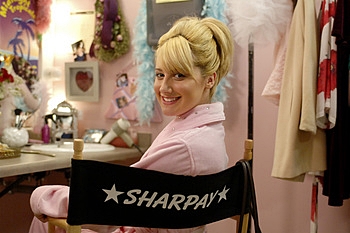 Siblings: An older sister Jennifer who is also an actress and is her best friend

Favourite movies: Just Married, My Best Friends Wedding and How to Lose a Guy in 10 Days

Favorite subject in High School: English or creative writing ‘We did poems and making a magazine. I did one on celebrities and called it Celebrity Life Magazine. I interviewed my good friend Kaley Cuoco’.

Favourite thing about acting: “I get to be all different characters that tell different stories”

Spends her spare time: Singing (she sang at the White House at the age of 12), shopping, and hanging out with her friends and sister

Currently: Stars in the Suite lift of Zac and Codi on Disney Channel. Her new version of “Kiss The Girl” will be featured on the special edition DVD of “The Little Mermaid.” She is also recording her debut CD for Warner Bros. Records.