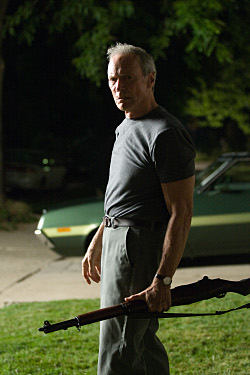 Were you actively looking for a part, four years after your last appearance in front of the camera?

No. I wasn’t looking for it specifically. There are not that many good roles for guys my age. After Million Dollar Baby, I thought, that’s enough now and I didn’t want to act again. But it’s a role that was my age. My producer, Rob Lorenz, read the script first and thought it was interesting and asked if I wanted to look at it. I did, and yeah, it was! And the timing was right for me. I was in the final stage of Changeling, doing the scoring. And I did not want to wait.

Why did you want to play Walt Kowalski?

I liked the fact he was kind of crazy and an equal opportunity insulter, a unique character I thought I knew well. Growing up, I knew a lot of people like that. It seems in that era nobody was scared to say what they thought. This is a guy who is a Korean War veteran, whose wife just passed away at the beginning of the story. He’s estranged from his two adult sons who he thinks have counted him out. His family doesn’t care too much about him. They are grown up and don’t want to hang out with an old guy. The grandkids don’t want to hang out either, except if they might inherit something from him. Most of his friends have died. He has worked at the Ford Motor Company for 50 years and his neighborhood, which used to be all automobile people, has been taken over by immigrants. And he doesn’t like the changes that he sees.

The film also spoke a little bit about obsolescence. And it seems to resonate in what happens in the news with the American auto industry like it is today. It sort of tied in with kind of the landscape right now – the end of an era. Walt is an obsolete person. He’s a little bit like Frankie Dunn from Million Dollar Baby and Sergeant Highway from Heartbreak Ridge, those kind of guys who are out of synch with society and the modern world. He doesn’t know how to relate to anybody. Nothing is the same and he’s kind of cynical about it too. But he ends up learning tolerance with someone belonging to a country he’s never even heard of.

How did you approach playing such a racist character?

The trap would have been to go soft with it. If you don’t play it all the way, then it becomes a Hollywood bailout. And if you’re going to play this kind of guy, you’ve got to go all the way. You cannot be Mr. Nice Guy. It is very non-politically correct and that’s good. There’s just no pussyfooting around it.

He’s definitely a racist but he learns a certain amount of tolerance along the way through his forced relationships with the Hmong family who lives next door and whom he despises at the beginning. It changes when he turns around and stars helping them out, trying to save the young kid, Thao, from the gang life, and teaching him ambition, ethics, morals…

At one point in the film, someone tells Walt, “You are not at peace.” Then, at the end, after he finally confesses, he says to the young priest that he is at peace.

He has kind of willed his ethic of hard work and being honest on to Thao, and so he left that behind him. Now, he feels that he let go.

How easy was it for you to act again after four years?

It was okay. I have been doing it for 55 years. It’s like anything: you get the character in mind and then you’re there doing it. And I was happy to get back in front of the camera. It was fun to play such a bizarre character.

Gran Torino is the first American movie to showcase the Hmong community in such a preponderant manner. What did you know about them?

Not much. I had to read and learn. They come from Laos, and during the Vietnam War, they fought along the Americans against the Communists, which, after the war, started to kill them. So, the U.S. government brought a lot of them here. Large communities of them are found today in Fresno, California, as well as Minneapolis-St. Paul and in Michigan, where we shot the film. And to be totally authentic, I wanted to cast only Hmong people in the film, which was a little tricky.

And mainly you chose non-professional actors. How did you guide them to achieve the performances you wanted from them?

I got young people – seventeen, eighteen – who had never acted before, but they were really good and brought a certain realistic feel to it. It comes off real. Bee Vang, who plays Thao, is very smart and somewhat unselfconscious, which helped because his character is that way too. I tried to give them a lot of freedom. I told them they don’t have to stick to the words literally. And when they spoke in Hmong, I didn’t know what they said anyway. I just tried to get them in the mood, to make them think of what their motivation is, what stimulates them in saying whatever they say. But also, not to think too much, to let it come up from instinct.

Gran Torino has been a huge success at the U.S. box office. Did you expect it?

I never expect anything. I am always amazed at why anybody goes to any movie or why anybody doesn’t go to any movie. Any movie you make, you make it because you’re hoping somebody wants to see it, but you never know. When it came out, it got nice reviews, but that doesn’t always necessarily mean a thing. But then, when the public started liking it, I said, ‘Fine. I’ll take the success.’

I thought older people might see it and see a similarity to their own family relations. But young kids liked Walt because he is so obstinate. I think everybody would like to be him for ten minutes. It becomes an interesting character that way; it is definitely a character that triggers something in people. I think there are a lot of good little messages in the film – about relationships with the church, and with friends and cultures people are prejudiced against.

That success, is it also rewarding?

Sure. Yeah. To be 78 years old and to be in a successful picture, that’s nice. It made more business than Million Dollar Baby. But I don’t know the whys or whats, and that’s what makes it provocative to still work in movies. You never know and you learn something new every day.

Most of your recent films deal with dark subject matter. How do you explain that attraction?

It just happens. I always like to try different things, different genres; stories that have a dramatic element and can generate conflict which I find appealing; where the characters have to overcome obstacles. That kind of thing is challenging. I don’t necessarily look for dark themes; they just seem to appear. But they usually are stories on the dark side, like the two war pictures, Flags of Our Fathers and Letters From Iwo Jima, Mystic River and Million Dollar Baby, and Changeling. I just don’t want to copy the current trends or do movies for teenagers. I want people to get more out of movies.

You don’t seem to stop working, having directed 5 films in the last four years. Do you feel a sense of urgency?

No. It’s been a long road. One day you wake up and you are 78 years old. I said to my wife Dina the other day, talking about Changeling and Gran Torino, ‘What am I doing? I am doing two pictures in a row and I am writing music. What the hell am I doing it for?’ Then I start laughing – because I like it, that’s why. And I can still learn something new all the time along the way. At certain points if your life, you like doing more. I am not sure what causes it or for what reasons; you just do it.

Forty years ago you created Malpaso, your production company. What are you the proudest of today, when you look back at your career, both in front of and behind the camera?

Just the fact that I was able to control my own destiny, so to speak. When I started directing in 1970, not a lot of actors were doing it. It seems at that time that it was a harder jump. I knew that with Play Misty for Me [his first film as a director], I had to prove myself, to show the studio that I could make a decent film out of it. If I had not had Malpaso, I don’t think I would have been able to do that. It worked out pretty good.

Do you have any regrets?

No, because I am not a regret type person. I don’t believe in regrets. Lots of things you would do differently if you’d do it again, but you don’t do it again, so you don’t think about it. But that goes for life in general. You’re only dealing with the knowledge you have at that time. At 20 years old, you don’t have the knowledge you have at 50…But, no. No regrets. There’s a few films that I probably wouldn’t have done now because maybe they didn’t say enough, but I’m just thinking differently now.

Everybody wants to know if Gran Torino will be you last screen role?

I’ll probably be glad only to act once in a while. That’s enough and then move on. And if it doesn’t happen again, it won’t break my heart because I’ll be very happy to stay behind the camera.

People call you an icon and a legend. What do you think about that?

It’s fine. It’s very nice. I’d rather be called that than something else less flattering. The main thing is to do each project the way you want, and if they find an audience, that’s terrific. And if they don’t, there’s nothing you can do anyway, so don’t let it concern you that much. An awful lot of good movies have done badly and an awful lot of bad movies have done very well. There are no real rhymes or reasons for it. Sometimes the stars don’t always align right. But if you’ve done the best you can, you feel pretty good about it.

In what frame of mind are you a few days before starting the Untitled Mandela Project, your 30th film as a director-producer, with Morgan Freeman and Matt Damon?

I don’t know. It’s getting clear. A lot of it is already clear, and it is getting clearer. It will be a political drama and a rather unique story in the way Nelson Mandela could think of using the Rugby World Cup in 1995 and its broken-down national team, the Springboks, one year after he became president of South Africa, to unite a nation – the way he went about spreading pride in the country, and the way it helped him solve the problems. We are casting now, and I just have to make sure I am casting well. That’s the secret. And once it’s cast well, it should take care of itself. It’ll have a lot of scope. It has a lot of games and elements to it. It’s too early to know if it’s going to be any good, but I’ll just do the best I can…

Perfume: The Story Of A Murderer, Ben Whishaw