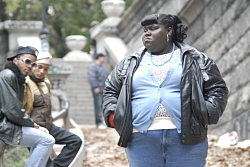 GABOUREY SIDIBE was born in Brooklyn, New York, the daughter of R&B/Gospel singer Alice Tan Ridley and Ibnou Sidibe, a native of Senegal. When her parents separated, Gabby moved to Harlem with her mother and older brother. A graduate of Washington Irving High School, she was pursuing a degree in psychology at Mercy College and working as a telephone customer service representative when she was cast in Precious. While she never studied theatre, she played the lead role of Torch in a lesbian version of the play Beirut at Lehman College in the Bronx, followed by roles in Lehman productions of Peter Pan, and The Vagina Monologues. She also appeared in the musical revue Uptown Serenade, in which she sang two Ella Fitzgerald songs. Following Precious, she will continue acting. We meet up in London during the London Film Festival…

Have you been able to explore London?

The very first morning I didn’t have anything on the schedule to do until the next day so I went to Buckingham Palace. It was amazing. I wish I could have seen the Queen. It’s so weird. How do you act with a queen; what happens there? It’s crazy! There is a huge palace in the middle of the city. Actually, it’s funny. I know where Princess Diana lived because my manager lived across the street from her palace, wherever she was sent. It was right across the street. She was a college student at the time!

It’s a terrific performance in Precious, but I understand you had no real aspirations to become actor. You thought it was a dream too far…

Yes. That makes a lot of sense, a dream too far. I had been told for most of my life that I would never be able to do something like this. Also I got a lot of cues from the media: when it comes to actresses and people the media cares about, you can probably count the girls that look like me on one hand. So I certainly didn’t think I could break any barriers and become an actress.

And even when you got the audition you weren’t convinced?

No. I wasn’t. I was withholding; on the fence. I thought it was a dumb idea to go in and do the audition because there was no way that I could be an actress. It had never been within my scope and I never auditioned for anything. I wasn’t an actress. I had no training. Nothing. I thought it made more sense that I to go to school. I was a receptionist for a company while I was studying psychology. But somehow or other it ended up with my going to the audition.

It was partly my mother and also I have a friend, Henry, who is the assistant director in my local theatre. He called me when they were coming to cast and he thought of me – because they were looking for a very specific girl that I look like. After the audition I went straight to work and by the time I got out of the subway, which is literally an hour later, I had the call back.

Apparently, you had an amusing phone call when trying to ring them for the call back…

Yeah, I was still in disbelief, I dialled the wrong number and I got some lawyer office and I was talking to this lawyer and who happened to have the same name as the guy I was meant to be calling. I was like, ‘Can I talk to Billy Hopkins?’ So they put me through to Billy, the lawyer! He was like, ‘What are you looking for?’ And I said, ‘I have just done this audition and I am doing the call back.’ He laughed, and said, ‘I hope they actually gave you the right number!’ I was pretty sure they did, because I was just one number off so he wished me luck. ‘I hope you get it.’ he said. So I called the right number and made an appointment to come in the next day. The callback was the next day and I was called within half an hour of leaving, saying Mr. Daniels wants to see you. He wanted to meet me that day but since I had already gone all the way back home – and I think the office at the time was five blocks away from where the call back was – so they said I made the appointment and went back in the next day and was talking to Lee for about forty five minutes to an hour. The whole time I am waiting to do the audition again because I was told I would have to audition for him, but it never happened. He just gave me the part.

Lee Daniels says that you told him things about the character that he had not considered. Do you remember what?

Being a fan of the book, anytime they wanted to do something a little different I would get up on a soapbox, saying, ‘No, you can’t do that because they didn’t do that in the book and we can’t change the book.’ I am anal and got very serious about the character. I have probably told him a lot of things just because there are so many layers to Precious and he just thought because she was big and dark skinned that she had to be a certain way. But in meeting me, I am big and I have dark skin but I am certainly better than what he thought of me. He thought I would be not so and certainly I changed his idea of who Precious is, based on the way I am.

What were you thinking during the audition?

It was the scene where Precious meets Ms Weiss for the first time, the social worker, and I was given about three minutes with it. I hadn’t seen the scene beforehand. For the most part if you have a manager and the manager submits you for the role then they will email you the sides to the audition so you can prepare the night before. But since this was an open casting call I just showed up, no appointment, no nothing. And they had sides available so I was given three minutes with it and I went in and I did it. I remember thinking that it was a complete waste of time. Billy Hopkins was in the room with his assistant director Jessica Kelly and I wasn’t nervous at all, because I was feeling pretty stupid for having cut class and I was wondering about what I was missing. That was pretty much all that was on my mind. I wasn’t nervous at all because I didn’t think I had it all; I thought that I had zero chance of actually getting the part.

I tend to disappear when I am acting as Precious. I am blank, completely, I am just feeling every emotion as Precious would feel it and how she should feel it. I leave my body and I take on this character. It is such a weird thing to describe because at first you do a certain amount of takes for every scene, sometimes more than others and for each time it is all brand new information and it a real revelation. It never grows cold or dead to me.

The film’s set in Harlem, where you grew up. Was yours a happy childhood?

I was okay .We were certainly not rich or comfortable or wealthy monetarily and it was a rough neighbour hood but I have never been hurt or fell victim to any societal pressures. I think really it was quite a normal childhood. I also grew up in Brooklyn in a rough neighbour hood and my parents divorced when I was young. Round there, that is pretty normal.

Do you have another movie lined up?

No. You can’t believe everything on the Wikipedia. You know that anyone can say anything on that! Roger Ebert was telling me about it. He said, ‘It looks like you’re a Tyler Perry movie next?’ I said ‘No!’ He said you need to Google yourself!’ But anyone can edit Wikipedia!

Do you worry that because of the attention lavished on the film, your rise is happening too fast?

It worries me because even my manager has never seen it happen like this. I have never been to a class or to an acting school so it is a weird situation and I am confused all the time, but it has certainly fallen into my lap in such a huge way that I have to do something with it. I have to. I owe it to myself. I love the idea of bringing a person alive who is just on paper and to blow life into that character is amazing. Since doing this press for the film, I have become so gobby. But it is amazing. Sometimes I am afraid by every bit of good news because I know that this happened this easily and I realize that. I totally appreciate the fact that this is special and that this doesn’t happen to everyone. I don’t know why this happened to me but I am just ecstatic that is. I know it won’t last either.

Precious dreams about the red carpet in the movie. How are you finding it?