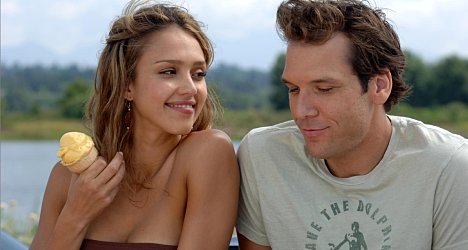 My character runs a penguin habitat at a place called Aqua World which is like a sea world, and she’s in charge. She has dedicated her life to penguins and she’s obsessed – there is penguin paraphernalia around the entire house, the bedroom is weird. It’s a little obsessive; she’s not really that shy about it, she’s pretty open about her obsession with penguins.

Chuck in this movie has a curse that every woman that he dates, once they break up with him the next guy that they meet is their, soul mate, or the person they are going to marry or spend the rest of their lives with so basically he runs through women because women all want to find that guy and they don’t care about chuck because they are not into him they just want to get it done and move on. So basically he gets to settle down and there’s no strings attached. I think its every guys fantasy.

Dane Cook is playing Charlie, he is a genius comedian. He is the master of comedians I think. I don’t think there’s anyone bigger than him right now for our generation, he’s hilarious. He’s totally natural and relatable and yet he has this super physical like Jim Carrey side, and he reminds me of a Steve Martin, Peter Sellers, and Chevy Chase. He’s more that kind of comedian. Which is cool because it’s that kind of comedy that I grew up with. That’s the kind of comedy I have always loved, being around him I just watch him what he does and I am definitely taking notes.

On working with Dane Cook

I was so happy when I met him, we totally got along, first day of rehearsals I knew we would be ok we really are quite compatible and it’s a nice back and forth. I am hoping this movie works so we can do another movie together because the chemistry is special. We are having a great time like literally from morning to night we are laughing our butts off and that’s very rare especially when the cameras aren’t rolling we probably have the best time. So I couldn’t have asked for a better partner in crime.

Dan Fogler playing Stu is hilarious he is a wonderful wonderful talent and I am so happy that he is in the movie.

He is doing an amazing job. I am working with a few first time directors and working with someone whom is knowledgeable with editing, they have very specific ideas. And its great having a director who has an opinion and an idea about how he wants the scene to look because it just gives us a guide.

It’s definitely a broad physical comedy – its R rated so its pushing the envelope in a lot of the comedy. And then there is a very sweet, very true love story at the core of it and it really is about finding your soul mate and not letting that person go once you find them and doing whatever it takes to hang on, because it is so rare to find someone that gets you and you someone that you are comfortable with. I think it’s just a perfect movie.

On the audience for this film

You can be any age and in any stage of a relationship married for 50 years married for 1 year or single for life and everyone can get something from this movie for sure.

On the physical comedy

I wasn’t ever really exposed to penguins myself. Spending time with them I have a warm fuzzy feeling about them now – I talk to them like they are my puppy, I get the puppy voice with them now. So I just tickle the back of their necks. They don’t like everyone but they like me and I just massage the back of their necks and they rest on their tummy on my hand. They are great animals.