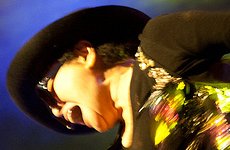 YOKO ONO is to take charge of next year’s Meltdown festival, the annual arts event held in the summer on the Southbank.

Meltdown is unusual in the world of arts festivals in that it appoints a famous name to select the acts – mostly musicians – that fill out the ten-day event. Previous curators have included David Bowie, Jarvis Cocker and Patti Smith.

“I am deeply honoured to curate the world-famous Meltdown Festival,” said Ono.

“In doing so I am aware of the great tradition of experimentalism mixed with classicism that has made the festival such an enduring part of the British arts landscape.

“I am now starting to approach names from all over the world, some of whom you will know and some who might be new to your world.

John Lennon’s widow has performed at Meltdown twice herself, in 2005 and 2009, and as an extra bonus, celebrates her 80th birthday next year.

Stansted Protest a ‘Sign of things to Come,’ at Heathrow