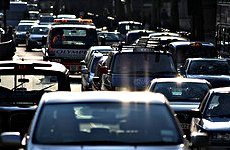 LONDON’S traffic congestion has eased over the last year, according to a new survey by satnav people TomTom, but it still ranks third worst in Europe for jams.

The way TomTom score traffic-jams for its league table is by looking at the percentage of main roads that have delays of more than 20 minutes on a journey that should take an hour.

While a hefty 34.5% of London’s roads are congested by this definition, that’s better than last year’s figure of 34.7% and London is one of the few major cities to post a decrease.

By way of comparison, top-placed snarl-up city Brussels saw congestion rise by 1.2% over the last year.

“Some cities have made good progress in cutting down the congestion on their streets but many have a long way to go,” said a spokesperson for TomTom.

On the downside, one of the main reasons for the slight fall in congestion is thought to be the economic slump: with fewer jobs around, more people are staying at home.

There are fears that, over the coming years, London’s traffic jam figures will go back on the rise as the economy picks up and major building projects such as Crossrail, plus the Olympics, cause road closures.

On top of all that, London Mayor Boris Johnson’s decision to get rid of the western part of the Congestion Charge zone will likely have a negative effect on jams.

EastEnders in Crisis after Viewing Figures Go Below 6 Million