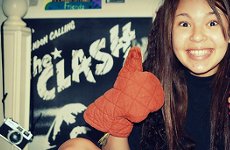 THE CLASH’S classic album, London Calling, is to be the subject of a new film that will follow the ins and outs of the creative process behind what is often regarded as the greatest rock’n’roll record of all time.

Called simply London Calling, the film will be co-produced by two of the band’s members, Mick Jones and Paul Simonon.

“Fans of The Clash all over the world have been waiting a long time to see their extraordinary story played out properly and accurately on the big screen,” said Alison Owens, the film’s main producer.

“We’re happy that Mick and Paul have given the project their blessing and are on board to help steer the ship.”

It is thought the movie will look at the development of London Calling from the point of view of its producer, Guy Stevens, and be set mainly in the Highbury studio in which the album was made.

London Calling is the second Clash project to get the go ahead in recent times.

Last month, it was announced that Film4 are to help fund Joe Public, a biopic of the late Joe Strummer, the band’s lead singer, who died in 2002.

Both Joe Public and London Calling start filming next year.