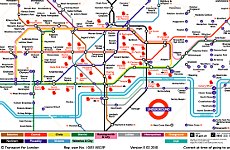 AN ARMY of three hundred serving and former serving personnel will be deployed at the capital’s tube and rail stations for London Poppy Day tomorrow (4 November 2010).

The volunteers will be seeking to beat last year’s record breaking single-day collection of £60,000. They’ve set their sights on London’s three million commuters and aim to raise a whopping £150,000 for The Royal British Legion’s Poppy Appeal.

Their fundraising efforts will be egged on by The Band of The Brigade of Gurkhas playing at Leadenhall Market and military bagpipers at several Tube stations. The collectors will be at their posts during the morning rush hour between 7am and 9am, over lunchtime, and during the evening rush hour from 5pm to 7pm. As in previous years, they will converge at Leadenhall Market in the City at the end of the day.

Russell Thompson OBE, the Director of National Events and Fundraising said: “Enthusiastic volunteers are the lifeblood of our fundraising efforts during The Poppy Appeal, and The Legion’s work strikes a particular chord with the current and former members of our armed forces.”

Nationally, the Poppy Appeal hopes to raise £36 million this year.

BA Christmas Strikes set to be Called Off Next Week