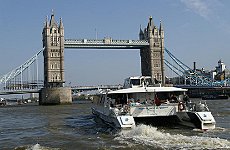 TOWER BRIDGE could be draped in advertising over Christmas if plans to sell space on the famous London icon get the go-ahead.

The 19th century bridge is one of the most recognised landmarks in London and traditionalists would likely protest at the idea of using it as a prop for ads.

But the people behind the proposal – The City of London Corporation – say that the scheme would be in good taste.

“There is no intention whatsoever that Tower Bridge becomes a glorified advertising hoarding. The City recognises and protects the bridge as a grade I listed building, a significant part of London’s heritage and a global icon.”

Behind the advert-plan lies what the Corporation calls a “one-off opportunity” in the form of scaffolding that is to surround the lower part of the bridge for essential painting work for three months this winter.

The idea is advert banners could be hung from the scaffolding.

Before the ads go up, the Corporation has to convince both neighbouring councils – Southwark and Lambeth – that it’s a good idea. The official planning application to Southwark reads:

“Temporay advertising banner (12 weeks) attached to scaffolding shroud which will be erected to enable the painting works to be undertaken on the bascules (lifting sections of the Grade I listed bridge) both of which will measure approximately 39m long by 11 to 5.5m high each side.”

You can leave comments on the planning application here, though be quick as the consultation period ends on 6 October.