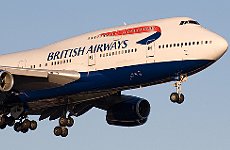 MORE strikes at British Airways are being lined up to add to the transport trouble for millions of Londoners caught up in the Tube station redundancies dispute.

A mass meeting held yesterday for BA cabin crew by the Unite union voted to launch a strike ballot in the ongoing battle at the airline which, like the London Underground conflict, centres on staff cuts.

“We will inevitably have to take an industrial action ballot on these issues,” said Unite’s Brendan Gold.
If held next month, the ballot could well lead to a strike over the Christmas period.

Meanwhile London Underground MD Mike Brown has applied for the job of parrot to Boris Johnson, the London Mayor.

“[The unions] have chosen to disrupt Londoners for no good reason,” he said.

“No good reason” or not, the two unions involved in the strike, the RMT and TSSA, reported “rock solid” support among their members during today’s stoppage, which led to severe delays on all lines bar the Northern.

The strike ends this evening, but some disruption will continue until tomorrow morning.

Olympic Boost for Mobile Phones on the Tube