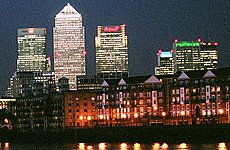 LONDON is no longer among the world’s most expensive cities, according to a new survey by consultants Mercer.

In last year’s report, London was ranked third priciest place to live for ex-pats, but in the intervening twelve months it has slipped down to 16th spot, thanks mainly to the pound’s fall against the dollar.

“Many currencies, including the euro and pound, have weakened considerably against a strong dollar, causing a number of European cities to plummet in the rankings,” said Mercer’s Nathalie Constantin-Metral.

With the Yen rising in recent times, Tokyo topped the list and its Japanese rival Osaka came second.

143 of the world’s major cities are included in the survey, which looks at the cost of living for your average ex-pat business-type person, things like executive housing, food and going out. High-end property prices have fallen by as much as 20% in London over the last year.

Other surveys have reported similar findings to the Mercer one. Back in March, a report for the Economnic Intelligence Unit put London at 27th most expensive city, down from eighth the previous year.

Prince Harry to Return to Afghanistan after Helicopter Course