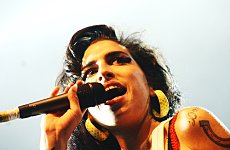 Amy Winehouse has infuriated her imprisoned husband by holidaying with her ex-boyfriend.

The ‘Rehab’ singer returned to the UK yesterday (06.01.08) to explain to “jealous” Blake – who is languishing on remand in London’s Pentonville Prison – why she went to the private Caribbean island of Mustique with former lover George Roberts.

A source said: “Blake is furious she was with George while he was locked up.

She has lapped up the sun while he’s been on his own feeling miserable. He doesn’t like her friendship with George because it makes him jealous. Being in jail he feels more and more detached from Amy.

“He wants an explanation. But he is also desperate not to lose her.”

While Amy was enjoying her break, Blake was reportedly ordered to endure a stint in solitary confinement for drinking cell-brewed alcohol, known as ‘hooch’, and making calls on a banned mobile phone.

A source close to Amy revealed: “She spoke to Blake when she could and made out she was not having a good time because she didn’t want to rub it in that she was having fun while he was locked in a cell, but the truth is that she and George were having a blast.

“They had a very passionate love affair in the past and are still very close, even though she is with Blake and he lives with his girlfriend in east London.”

Amy’s spokesman has denied any romance between the pair, saying: “George and Amy are simply old friends.”

Blake is awaiting trial conspiracy to pervert the course of justice relating to a charge of assault.

London Eye Traps 400 for an Hour