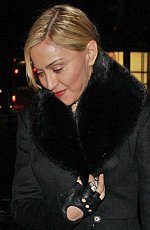 Madonna is the highest-earning woman in music.

The 49-year-old singer has topped the first Cash Queens of Music list, compiled by Forbes.com, after raking in USD72 million between June 2006 and June 2007.

The Hung Up singer’s personal fortune was boosted by her successful Confessions Tour, which generated a staggering USD260 million worldwide.

Madonna also benefited financially from working with high street fashion chain H+M, general record sales and her deal with US broadcaster NBC for the rights to air her concert from Wembley Arena.

She also has a substantial collection of London property.

Barbra Streisand, 65 – who was the oldest performer on the list – finished second with USD60 million. The Woman In Love star remains one of the most successful female entertainers in the world, having sold more than 145 million albums worldwide.

The My Heart Will Go On singer’s fortune was boosted by her five-year Las Vegas residency, which ended last December. Her A New Day show grossed more than USD400 million since it opened at Caesars Palace in March 2003.

Gwen Stefani, Christina Aguilera and Mariah Carey all feature in the top 10. The top 20 women on the list earned a combined fortune of USD420 million.

Only ‘active’ artists – those who released an album or film or toured during the specified period – were considered. Forbes’ Cash Queens of Music full list is available online at www.forbes.com.

Boris Johnson Warns EU to Give London Bankers What They Want,...