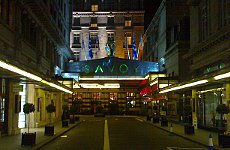 23,000 TELEGRAPH READERS have confirmed what LondonNet readers have known all along; London is the greatest British city.

“You can have an awful lot of fun here. The pubs are packed, the clubs are pounding, the theatres and sports grounds are exhilarating” explained the newspaper’s Nigel Tisdall.

The annual poll, published today, also places one of the capital’s most prestigious hotels, the newly refurbished Fairmont Savoy as the best hotel in the country.

The Savoy Hotel, once a favourite London home to writer Oscar Wilde and former PM Winston Churchill had £230 million lavished on it in a three year labour of love.

“It was only fair to expect the new-look Savoy hotel would offer us something rather special when it reopened for business last October.”

“Even more impressive is the mood of the staff – some old, most new – who are all clearly proud to be associated with an iconic hotel enjoying a new lease of life” says Tisdall.

The awards follow today’s news that September was a record month for London hotels, with a 10.4% increase in profit per room.

London Ranked Top Vegetarian City in the World by Peta