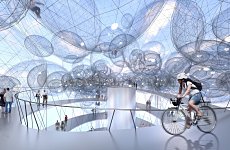 GIANT digital towers planned for the site of the London Olympics could be built with the help of millions of “micro-donations”, say the scheme’s promoters.

In the drawings, the futuristic project looks like a couple of huge bubble-blowing upright tubes, hence the name “Cloud“.

The idea is that the 120m structures would have massive digital images beamed via their bubbles to the city below, giving info on the various Olympic events and goings-on.

Boris Johnson is a fan of the Cloud, but so far it is only on the shortlist of projects that could get state funding in time for 2012, hence the idea of raising cash from donations.

“It’s about people coming together to raise the Cloud,” said Carlo Ratti, an architect involved in the project.

“We can build our Cloud with £5m or £50m. The flexibility of the structural system will allow us to tune the size of the Cloud to the level of funding that is reached.”

Keira Knightley Up for More Awards

Rioters Should be Watercannoned, Teargassed and Shot, Say Londoners