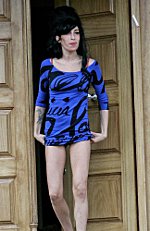 Amy Winehouse’s death was caused by ‘misadventure’ a London coroner has ruled. The singer was was four-and-a-half-times the drink-drive limit when she died.

The ‘Rehab’ singer’s cause of death was recorded as “misadventure” at an inquest into her passing on July 23 2011, and claims she was drinking after three weeks of being clean of alcohol and was poisoned by it.

St. Pancras coroner Suzanne Greenway said: “She had consumed sufficient alcohol at 416mg per decilitre [of blood] and the unintended consequence of such potentially fatal levels was her sudden and unexpected death.”

The inquest found that her vital organs were in good health and she had no traces of illegal drugs in her system.

Police found three bottles of vodka, two large and one small, from her flat after her death.

An initial examination into her death proved inconclusive and was adjourned in August.

Amy suffered with drink and drug addiction during her life and was hospitalised a number of times, and her father Mitch has since set up an Amy Winehouse Foundation will which help young addicts deal with their issues.

He has since revealed he would like Girls Aloud star Sarah Harding – who herself checked into rehab for alcohol and depression issues – to front the foundation.

He said: “If we could pick Sarah up when she recovers and put her in front of a school assembly to tell those kids the reality of drinking and alcoholism, it would be making a big start.

“Sarah will be ideal, but all in good time when she has faced her own problems.”

Mitch Winehouse to sing at the O2