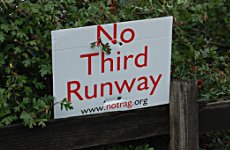 GORDON BROWN could be set to turn his back on the expansion of Heathrow airport, as the campaign against a third runway gathers pace.

Opposition to the runway and a sixth terminal has spread from fringe Green groups to both opposition parties, concerned celebrities and now into the ranks of government itself.

Prime Minister Brown is due to consider the options for Heathrow with the cabinet today, but was left in little doubt as to Labour back bench feeling at a meeting of the party’s MPs last night.

“There were no voices raised in favour of the third runway,” said Martin Salter, MP for Reading West. “It was made clear that Labour’s environmental credentials are on the line on this.”

As a first step, Brown is thought likely to postpone a decision on Heathrow expansion from this week to the end of the month.

The latest campaign trick dreamt up by climate change activists involves Greenpeace buying a strip of land on the site of the proposed runway. The environmental group say they’ll refuse to sell the land and, though the government could force them to, it would delay the project.

Among celebrities who have joined in the Greenpeace land grab are Emma Thompson and Alistair McGowan.

“I don’t understand how any government remotely serious about climate change can even consider these ridiculous plans,” Thompson stormed.

“It’s laughably hypocritical. That’s why we’ve bought a plot on the runway. We’ll stop this from happening even if we have to move in and plant vegetables.”

Boris Johnson says he will use legal action to try to stop the Heathrow scheme, but the London Mayor has also angered environmentalists by backing a totally new airport in the Thames Estuary, which, say critics, would cause devastation to wildlife.

Heathrow Immigrant ‘Prison’ to be Biggest in Europe