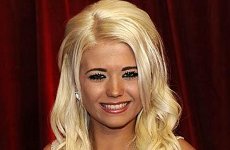 EASTENDERS is to screen a ‘live birth’ during an Olympics special next week; the BBC soap airing a seven-minute live segment, during which Lola Pearce will have her baby.

The episode is due to go out on 23 July and on top of the birth, the Olympic torch is also to feature in the live section.

Lola’s granddad Billy Mitchell (Perry Fenwick) will be carrying the torch in Albert Square when he learns Lola (Danielle Harold) is in labour and he dashes to her side after handing over the flame.

A source said: ”No one has tried anything like this on EastEnders live before, so it is a challenge to get the emotion right. It will be the toughest thing Danielle has done in her career.”

The 20-year-old actress said: ”Teenage pregnancy is a big issue. I’ve got friends who’ve had babies young, so I’ve seen what they’ve been though and how hard it is.

“Lola’s been ignoring the fact that she’s pregnant up till now, but she’s starting to get a bit nervous.

”I want to make sure all teenage mums out there don’t feel this story has been portrayed in a bad way. Lola’s strong and she thinks she can do anything she wants. I hope she’ll be a good mother to her baby.”

Londoners Have Dirtiest Bed Habits in the Country