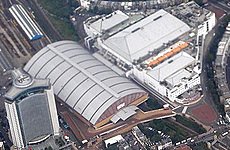 CHELSEA have poured cold water on stories linking the west London football club with a move to nearby Earls Court.

“We have no plans to move stadium at this time,” said a club spokesperson.

Yesterday evening news emerged that the owners of the Earls Court site (pictured) had been in secret talks to sell to Chelsea the site on which the exhibition centre stands.

“There have been discussions about it and the club is clearly considering its next step,” a source told The Guardian.

The site is big enough to fit a 60,000 stadium, a handy jump from the 42,000 able to fit into the club’s current Stamford Bridge ground.

With London rivals Arsenal already sitting pretty in a 60,000 home and Tottenham and West Ham soon to get big stadiums of their own, the attraction of the move is obvious.

However, redevelopment of the Earls Court site for football is reckoned to have a price tag of at least £200M. Chelsea looked at the idea of a switch to Earls Court a few years back, but decided against the idea, primarily, it is thought, on cost grounds.

Earls Court’s owners, Capital and Counties, have an 8,000 homes alternative for the site, but apparently believe there is more money to be made out of a football stadium. Either way, Earls Court is to be used as a venue for the 2012 Olympics, after which it will be demolished.

British Asian Spies Have God on Their Side