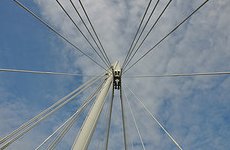 LONDON is set to get its own web address suffix after an application was filed with internet governing body ICANN.

Behind the idea of a dot London address is the city’s official promotion body London & Partners, which hopes having the city name on web browsers around the world will help promote tourism and investment.

“The dot London domain provides a tremendous opportunity to extend the global presence of London across the Internet, and likewise position it as a centre of digital innovation,” said Gordon Innes, CEO of London & Partners.

“We believe we are now excellently placed to benefit from the unprecedented opportunities provided by the de-regulation of the internet naming system.”

Unfortunately, the web name application process takes up to seven months, so the new domain name won’t be available until after the London Olympics.

Assuming the application gets the go ahead, websites would pay London & Partners’ agents for use of the dot London name. Tourist attractions and entertainment venues are thought likely to be first in the queue.