MENUMENU
Home London News London Olympics to Bring in 1,000 US Agents to Beef Up Security 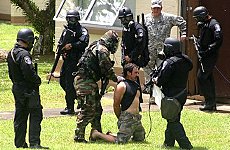 ONE THOUSAND American agents are to be added to the tens of thousands of British security staff set to police the London Olympics, according to leaks from government officials.

As well as the 12,000 Metropolitan police officers allocated specifically to the Olympics, private security firm G4 is to provide up to 20,000 staff for stadium security – nearly double the original estimate – and 5,000 British troops have also been earmarked for the Games.

But 37,000 security personnel isn’t quite enough for Uncle Sam, whose concerns have led to the plan for 1,000 US agents – 500 of them from the FBI – to travel with the country’s athletes and officials.

“The Americans are risk-averse, with a capital A and underlined,” a British security source told The Guardian.

The government has said it doesn’t “recognise as true” The Guardian’s report of US concerns, but notably failed to deny the 1,000 American agents angle, offering only a bland statement:

“Security planning is on track and funding has been protected. The Government is committed to delivering a safe and secure Games that London, the UK and the world can enjoy,” read the Home Office statement.

“The International Olympic Committee (IOC) undertake detailed inspections of security preparations and have full confidence in our plans.

“The UK has a strong and close working relationship with the US, who have expressed similar confidence.

“The Government, London 2012 Organising Committee (LOCOG) and G4S are working together to finalise the requirement for venue security and, as is common at major events in the UK, we will make the best and most appropriate use of all available resources.”

Naomi Campbell On Bail after Assault on Copper

Zara Phillips is pregnant – royal baby due in early 2014