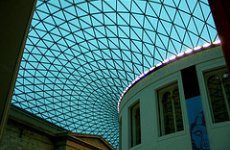 THE BRITISH Museum and the Tate Modern could have their plans for new buildings scrapped due to government cutbacks.

Both tourist magnets had ambitious multi-million pound expansion schemes approved by the government’s Department of Culture, Media and Sport two years ago, but now face an anxious wait while the ministry tots up its figures again.

At issue is a recently discovered £100M ‘hole’ in the accounts for the DCMS, which has to be clawed back somehow.

“It is possible that difficult decisions will be needed, but none has been taken yet,” said a spokesperson for the DCMS.

The Guardian reports that letters from the DCMS have been sent to arts institutions around the country, “seeking contributions from unspent capital money.”

Last week, Culture Minister Barbara Follett said: “There are too many schemes bidding for too little money.”

The British Museum aims to have a new £135M north-west wing for extra exhibitions, while the Tate Modern’s £215M scheme would increase its gallery space by 60%. The museum was pledged £22.5M for its scheme, while the Tate was in for £50M.

Other plans now in the balance include a new HQ for the British Film Institute on the South Bank, which had been promised £45M by the DCMS out of a total cost of £166M.

London Olympics Football to be Named by a Fan