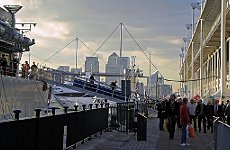 The Essex pair, second and third placed in the TV talent show, will perform at the show’s opening at 11am alongside members of the Royal Engineers, who are to show off their waterborn skills as the next part of the launch ceremony.

Other stars who have booked a passage at the Boat Show include sailing king Ben Ainslie and ITV at the Movies host Giles Vickers-Jones, who is to MC the event.

But the real celebs of the show are the boats themselves and with hundreds of exhibitors in town to parade their wares, from muscly power boats to cool canoes, there is plenty of star material on offer.

The London International Boat Show at the ExCel runs from 8-17 January. Admission prices start at £13 and it’s free for under-16s accompanied by an adult, as long as tickets are pre-purchased.