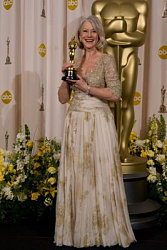 She caused controversy this autumn by admitted she was date raped twice when she was younger but did not inform police because it was a “tricky area” in the male-female relationship.

Now, Dame Helen Mirren has claimed that women’s jealousy may make female jurors more likely to believe a rape victim “asked for it”.

“Whether in a deep-seated animalistic way, going back billions of years, or from a sense of tribal jealousy or just antagonism, I don’t know, but other women on a rape case would say she was asking for it,” Helen said. “The only reason I can think of is that they’re sexually jealous.”

The 63-year-old actress has sparked rage from activists who hope to increase the rate for reporting rape crimes, from its current 6.1 percent. Assaults have a 25-percent report rate, according to the Times.

Helen told GQ for the magazine’s October issue that her assaults were fuzzy territory because they were non-violent.

“I was date-raped, yes. A couple of times. Not with excessive violence, but rather being locked in a room and made to have sex against my will. If a woman voluntarily ends up in man’s bedroom with her clothes off…it’s such a tricky area, isn’t it? Especially if there is no violence. I think she has the right to say no at the last second. But I don’t think she can have that man in court under those circumstances.

“I guess it is one of the many subtle parts of the men/women relationship that has to be negotiated and worked out between them.”

Rolling Stones roll in the millions