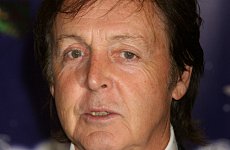 Called Carnival of Light, the song is some 14 minutes long and represents the Fab Four at their most avant garde. It was played in public just once, at a festival in 1967.

“I like it because it’s the Beatles free, going off piste,” said McCartney.

“I said to the guys, this is a bit indulgent but would you mind giving me 10 minutes?” he recalled to BBC Radio 4.

“All I want you to do is just wander round all of the stuff and bang it, shout, play it. It doesn’t need to make any sense. Hit a drum, wander to the piano, hit a few notes… and then we put a bit of echo on it. It’s very free.”

However, in order to bring us Carnival of Light, McCartney needs the thumbs-up from the other Beatles or their living representatives. When it was last considered for release, in 1996, Sir Paul was the only one who voted for it to see the light of day.

Twelve years later, McCartney is hoping for a different reaction. “The time has come for it to get its moment,” he said.

British Museum to Show Off its Goodies on TV Through BT...