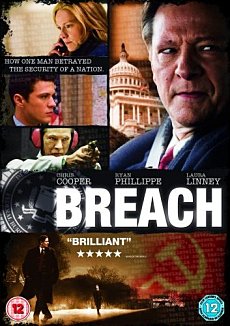 Released: 31 March 2008
Based on the incredible true story of the greatest security violation in the history of the FBI, Breach is a smart and gripping spy thriller, featuring a devastating central performance from Academy Award® winner Chris Cooper, and outstanding turns from Ryan Phillippe, Laura Linney and Dennis Haysbert. Breach is available to buy on DVD on 31 March 2008 from Twentieth Century Fox Home Entertainment and MGM Home Entertainment.

Eric O’Neill (Phillippe; Crash, Gosford Park), a computer specialist who desperately wants to be made an FBI Agent, is assigned to clerk for renowned operative Robert Hanssen (Cooper; American Beauty, The Kingdom), the sole subject of a long-term, top secret investigation.

Within weeks, Hanssen seems to warm to his new apprentice, who in return grows to respect Hanssen. However, O’Neill is soon confronted with the true reason behind his assignment, as the Bureau asks him to use Hanssen’s growing trust to draw this suspected double-agent out of deep cover. Now engaged in a lethal game of ‘spy vs. spy’ where nothing is as it seems, O’Neill finds himself fighting to bring down Hanssen before the treacherous double-agent can destroy him, his family and the nation they are both sworn to serve.

Directed by Billy Ray (Shattered Glass) Breach tells the dramatic and unmissable story of one of the most notorious spies in US history. Taking you further behind the secret doors of the FBI, the DVD contains over 45 mins of fascinating in-depth behind-the-scenes special features. Don’t miss your opportunity to own this nail-biting thriller on DVD this March.